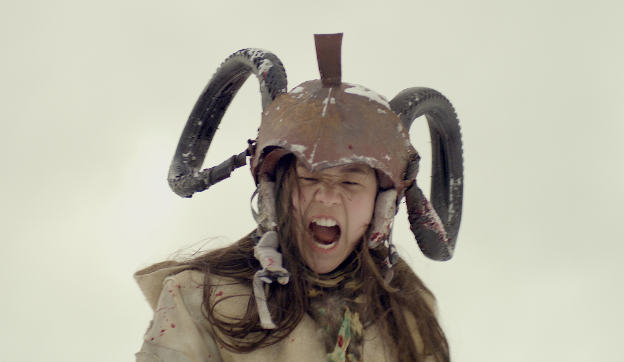 Writer-director KC Carthew delivers a wholly unique and uncompromising vision in her second feature-length film, Polaris, which screened as part of the Whistler Film Festival and is a nominee for the Alliance of Women Film Journalists’ EDA Award at the festival.

Set in a snowy 2144 following what can only be assumed to be a global eco-disaster, viewers are introduced to 10-year-old Sumi (Viva Lee). In a world seemingly without men or technology, Sumi has been raised by a polar bear “mother” and shares a kinetic and deep bond with nature, guided by Polaris, the North Star. Surviving off the land, Sumi’s brutal but contented existence is interrupted when she is violently kidnapped and locked in a cage by a band of female hunters. It is here that her grisly adventure begins in earnest.

Looking like the Arctic female versions of Mad Max: Fury Road’s War Boys, these hunters – and Sumi – speak an indecipherable language built on grunts, growls, and gestures, none of which are subtitled for the audience. But one doesn’t need translation to see the cruelty at which these adult female hunters treat their young captive, nor are words needed to describe the visceral and bloody battles that ensue.

Polaris is a story that is entirely told through its visuals, be it violence or the rare kindness found along the way across the snowy tundra in the form of kindred spirits. Gritty and exceptionally violent at times, including a scene in which Sumi takes an opponent’s eye out with her bare hands without much hesitation, Carthew navigates the fine line between the brutality of human nature and the frozen mythology of Sumi’s world.

While the look and feel of Polaris’ female warriors undoubtedly draw comparisons to Mad Max, that’s where the comparison ends as Carthew boldly sets the rest of the film apart from any of her contemporaries. It is incredibly bold to make a feature-length film without dialogue hinging with a relatively unknown child actor in the lead and a real-life polar bear (the bear named Agee recently retired from being the only trained polar bear actor in North America).

Filmed in the Yukon and drawing on elements of sci-fi and fantasy, Carthew eschews any backstory or further explanation of how Sumi’s world operates. We aren’t meant to know what happened to bring about this arctic apocalypse, what happened to all the men, or how Sumi’s supernatural connections to nature came to be, and quite frankly, it doesn’t really matter. Forced to be fully immersed into Sumi’s world is ultimately what works best for the film, smoothing over any of the plot points or questions viewers may have. If Sumi doesn’t know, why should we?

Action-packed from the get, Polaris is strongest when it utilizes practical effects. The visceral reaction of bright red blood on freshly fallen snow is always impactful. While the use of a few digital effects detracts from some of the action and is among the film’s few stumbles, that is a reflection of budget as opposed to Carthew’s overall vision.

Making her feature film debut in Polaris, there is no doubt that Lee will be a future star. Utterly captivating without uttering more than a few grunts and growls, Lee gives a full-bodied performance utilizing everything she has to bring vigour to Sumi under Carthew’s direction. If Lee is this mesmerizing without dialogue, her acting future seems very bright, indeed.

One of the most inventive and visionary Canadian films in recent years, Polaris is a must-watch.