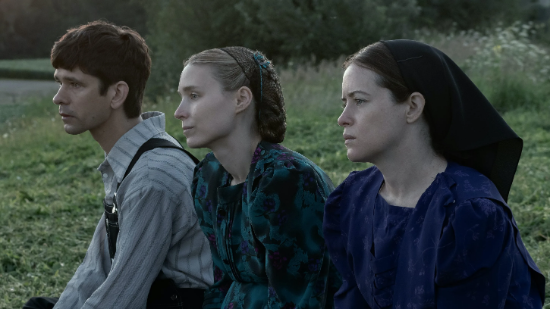 Sarah Polley‘s cinema adaptation of Miriam Toews’ novel Women Talking translates with astonishing power. A push and pull between faith and feminism, the story centers on three generations of Mennonite women who re trying to come to terms with the sexual and physical violence they suffer within their small community. After years of sweeping the assaults under the rug in fear of the community’s patriarchal dominance and tradition, the women convene, in secret, to discuss their fate and that of their female compatriots.

Haunting editing and drama-laden heavy dialogue take center stage, strengthened by breathtaking performances from an ensemble cast of powerhouse actresses. The singular male character, played by Ben Wishaw. is an ostricised community member and now school teacher who takes the minutes of the women’s clandestine conversations. His work is heartbreaking on a level that catches you off guard. It is undeniably award-worthy.

Claire Foy, Jessie Buckley, Rooney Mara, Shiela McCarthy, and Kate Hallet shine bright as they portray characters who battle fear, anger, oppression, and piousness to discuss the bigger picture and the safest future for the next generation of girls. Polley’s repeated use of blood imagery is striking. Tied to sex, abuse, loss, birth, and rape, it appears solely in the presence of female characters. The film delves into extreme religious ideology and, more importantly, the persistent female resiliency and mother-bear instinct.

Women Talking will ignite a fiery conversation the moment you leave the cinema. It is a complex portrait of womanhood and a bold comment on the complicit silence about abuse and violence.