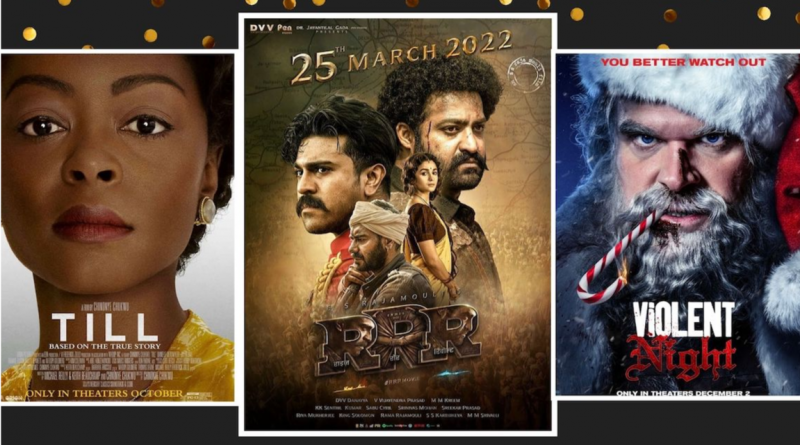 This is my joyous listing of six films I am glad I saw, including one that was the most fun I had at a movie theater this year, and a seventh film that was the least fun!

The most fun I have had at the movies in 2022 is during the screening of Indian director S. S. Rajamouli’s epic RRR. I did not know about the active cult following Rajamouli had acquired in the United States, so I was unprepared for the high excitement that rippled through the Music Box Theatre in Chicago a few weeks ago as he made his way to the stage. Not only were there rambunctious hoops and hollers, but some people were dressed in festive cultural attire.

The experience was euphoric, to say the least, and in some ways reminded me of the beloved campy showings of Rocky Horror Picture Show or Beyond The Valley of the Dolls. By the end of the evening I was up on my feet with the rest of the crowd giving the director a standing ovation. My applause was as much for the shared audience experience as it was for the self-aware film itself.

No plot synopsis can adequately hint at this film’s abundance of thrills, but suffice it to say that the picture’s two fictional leads are revolutionaries—Komaram Bheem (N.T. Rama Rao Jr.) and Alluri Sitarama Raju (Ram Charan Teja)—who served their country during a 1920s era that roars, quite literally, with lions and tigers and fires. Set amidst the period of the British Raj, the story begins with the forceful taking of a young Gond girl away from her family by British soldiers. This sets off a fierce rivalry—that blossoms into an unexpected bond—between Komaram, the formidable tribal guardian seeking to rescue the girl, and Alluri, an officer in the Indian Imperial Police who is eyeing a promotion, and perhaps something much deeper. When they first meet they don’t know the identity of the other, and that they are working at cross purposes.

With each major introduction of a hero or villain on the screen, the crowd applauded or jeered, and sometimes stomped their feet. Laughter was a major part of the experience, and the Music Box is perhaps one of the best venues in Chicago for this sort of exuberant audience participation. “You’re conditioning the audience to shout, to have an involuntary reaction of awe,” Rajamouli told our contributor Isaac Feldberg in a recent interview. “I love creating those kinds of moments. And when I see the reactions of the audience in the theater? Oh my god! All the effort that’s been put in is worth it.” In his enthusiastic review of the film, our critic Simon Abrams wrote that like James Cameron, “Rajamouli has earned a reputation for pushing the limits of industrialized pop cinema. In that sense, RRR feels simultaneously personal and gargantuan in scope.” Continue reading…

Chaz Ebert is the CEO of several Ebert enterprises, including the President of The Ebert Company Ltd, and of Ebert Digital LLC, Publisher of RogerEbert.com, President of Ebert Productions and Chairman of the Board of The Roger and Chaz Ebert Foundation, and Co-Founder and Producer of Ebertfest, the film festival now in its 18th year. She is also a member of the Chicago Film Critics Association.