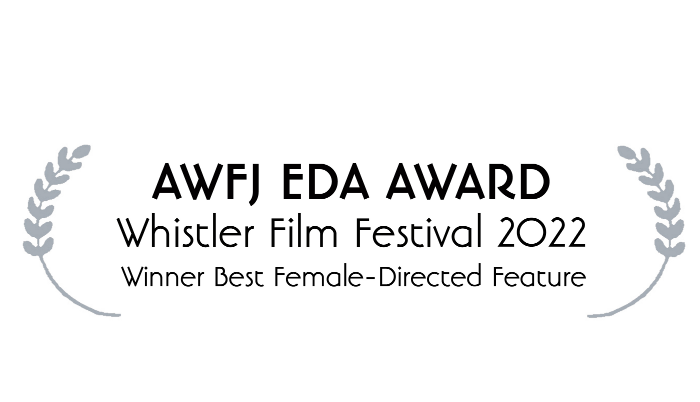 This is the tenth consecutive year of the partnership between AWFJ and WFF to recognize and honor the work of female filmmakers. WFF nominates five narrative films and ten short films for consideration. AWFJ members are the jurors. You can find the list of nominated films here.

This year’s winner of the Best Female-Directed Feature is Rodeo, directed by Montreal filmmaker Joelle Desjardins Parquette. this is her first feature. The film tells the story of an unusual and engaging father-daughter relationship that plays out in a cross-country road movie in which a hard-living trucker and his nine-year-old daughter travel from Quebec to Alberta for a truck rodeo (race). In the jury statement, the four-member panel said that after two rounds of deliberations, they had “decided to present the EDA an engaging father/daughter story that is told sensitively and without clichés. The characters are fully fleshed out, feeling real affection, experiencing real jeopardy and leaving us wanting to know more. The well cast, beautifully shot and edited film grabs us emotionally from the start and doesn’t let go. The EDA Award for Best Female-Directed Feature goes to Rodeo, a fantastic first feature from filmmaker Joëlle Desjardins Paquette who we find to have a strong and distinct visual style and cinematic voice. We applaud and congratulate her and can’t wait to see more from her in the future.”

The 2022 winner of the EDA Award for Best Female-Directed Short is Violet Gave Willingly, a documentary directed by Claire Sanford, who is also based in Montreal. According to the jury statement, the ten nominated films were all excellent, but our deliberations drew to a conclusion with one winner, a documentary short that, in the opinion of the jury, delivers a powerfully gripping and thought-provoking feminist narrative in which a mother and daughter dance around a subject that neither wants to discuss. The Mom creates art, the daughter is behind the camera so there is an almost eerie disconnect as we are slowly drawn into their lives and the story of their unforgettably difficult past, with the last few minutes of the film delivering a blow to the gut that is stunning. The 2022 EDA Award for Best Female-Directed Short goes to Violet Gave Willingly, with appreciation and sincerest congratulations to director Claire Sanford for her wonderful film and the win. Whistler Film Festival, known as ‘Canada’s coolest film fest’, has been championing women in film since its inception in 2001. In addition to programming films directed by women, the festival holds an annual Women on Top event, gathering leading women in film from around the world to meet, greet and network with each other. Additionally, the festival’s annual presentation of Women In the Director’s Chair and Women in Film & Television Vancouver mentorship programs connect up and coming female film directors to industry moguls and the methodology they recommend for success.

For more information on WFF and the nominated films, visit whistlerfilmfestival.com.