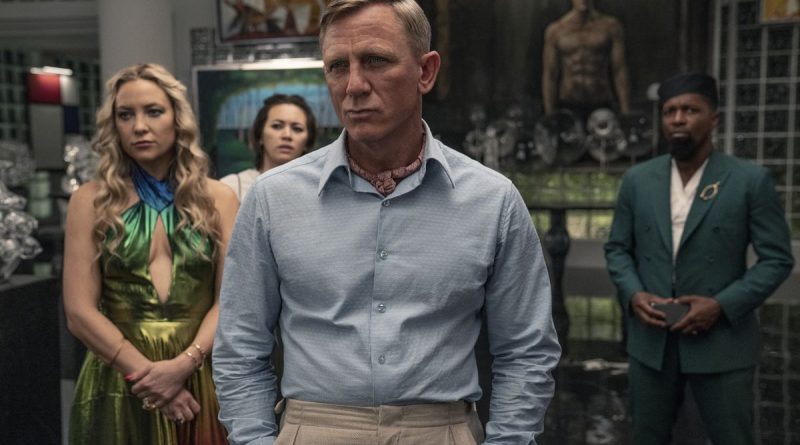 Gone are the cardigans and libraries. Gone the bookish air of a British mystery. Gone the cozy. In their familiar places are technology, a pandemic, wizardry, and glass galore. Writer/director Rian Johnson created a blockbuster with Knives Out, appealing to British mystery fans. He’s now created a much noisier, more intricate, more boisterous mystery but, nonetheless, an intriguing one.

The setting is a Greek island owned by the bubbly, be-robed billionaire, Miles Bron (dashing Edward Norton). He has reunited his friends and assigned rooms by their chakras with a view of the titular dome — very Bucky Fuller. They are eager to join him for the Tik-Tok factor although not eager to trust him for the killer factor. Among the guests is uninvited Benoit Blanc, the crack detective from Knives Out, re-played by the crack actor Daniel Craig. His Southern accent, which sounds like the cartoon’s Foghorn Leghorn and Congress’ Senator Claghorn, reminds knowing linguists how proximate Southern is to Craig’s native British in the accent department.

What Blanc is doing there starts many puzzles. Each guest holds a secret — not held out, as if displaying a completed Rubic’s cube but tucked close to the vest like a dandy hand of cards. Among them are Miles’ former business (?) partner (Janelle Monae doing her best), the Connecticut governor (Kathryn Hahn, always great, here a brunette), a knife-edge scientist (Leslie Odom Jr.), a designer (Kate Hudson) with her assistant (scene-swiping Jessica Henwick), and a YouTube influencer (Dave Bautista) with his assistant, Whiskey (Madelyn Cline). One dies. Each is suspect.

It is only to his former business partner that Miles queries, “What are you doing here?” Blanc (a misnomer) puts his considerable mind to figuring that out. Johnson wrote the devious script with notes of Auguste Dupin and Hercule Poirot — part fun guy, part point man, while playing with words like “embreathiate.” But by the time the glass breaks into shards, the movie has become less Christie mystery and more he said/she said action film, thereby seriously disappointing lovers of the cozy mystery.

Jenny Eagan’s costumes are brilliant, especially the rainbow dress draped by the designer; also sparkling is Rick Heinrichs’ production design. Glass Onion is not Knives Out, but it still fits in the genre of disruptive mysteries, including those nifty cameos in the Zoom squares.