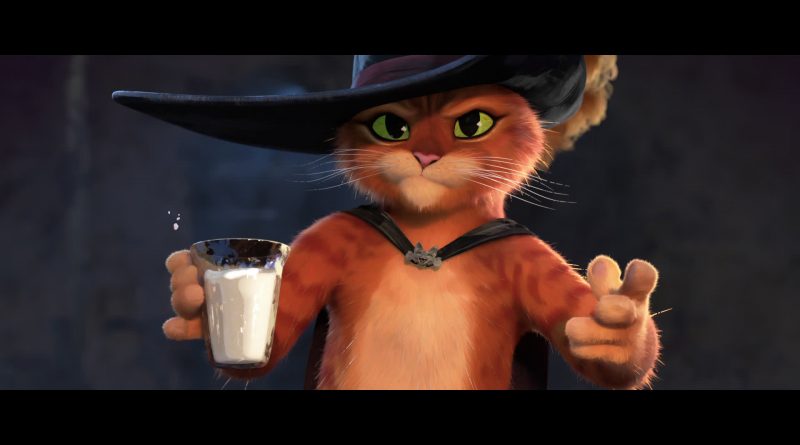 Everyone knows that cats have nine lives. They land on their feet. They flirt with, then skirt, danger. They are charming and flirtatious and ego-centric, furry and purry. And then there’s Puss in Boots — all of the above and more. But, now, he’s down to the last of those nine lives so vaunted in fairy tales.

What’s a sword-wielding, Spanish-speaking gato to do? Well, according to this film, Puss has to skipperdoodle along on the classic fairytale journey. He has to find the Last Wish that will return the nine lives he started with after gazing mournfully as his nine lives flash before his eyes (those eyes!). Puss does not go alone. He is followed and led and shadowed by other fairytale characters and a couple of interlopers from nursery rhymes (best to do your homework).

Speaking of which, the fairytale of Puss in Boots goes back to an Italian gatto from the 1500s. That anthropomorphic cat had tricks designed to help his master gain a bride. But when the current cat appeared in Shrek, his portrait was inspired more by cat videos and Zorro. Puss stole that ogre’s show. Then he appeared in his own film, his hat still feathered and cocked; now, 11 years later, he’s back.

Puss declares from the very start that this story is a fairy tale, just as he declares from the start that he is a cat — but no lap cat — that he “laughs at death,” and that his name is not Pickles. His one true love is himself. Once again, and delightfully, he’s voiced by Antonio Banderas. His enemy is Goldilocks, voiced by Florence Pugh. His fiancee, Kitty Softpaws, is purred by Salma Hayek Pinault. The supporting cast includes John Mulaney as the very Big Jack Horner and, as the Cockney-voiced Mama and Papa Bear, Ray Winstone and Olivia Colman. Da’Vine Joy Randolph provides the sassy voice of Mama Luna.

They speak the words written by Paul Fisher in in a convoluted screenplay that involves a dog masquerading as a cat, a star to wish on, and a map to steal. The large cast follows the direction of Joel Crawford (The Croods).
Puss in Boots: The Last Wish is not so cute as other modern versions. It is dark. It is too long and it is too loud. At least for adults. Unless little ones have a good grasp on the cast of characters from rhymes and tales, from YouTube and cartoons, the whole thing may drag them into darkness.

Whereas Puss in Shrek was darling (those eyes!), this 2.0 version, despite Banderas’ silken purr, is harder to pet.