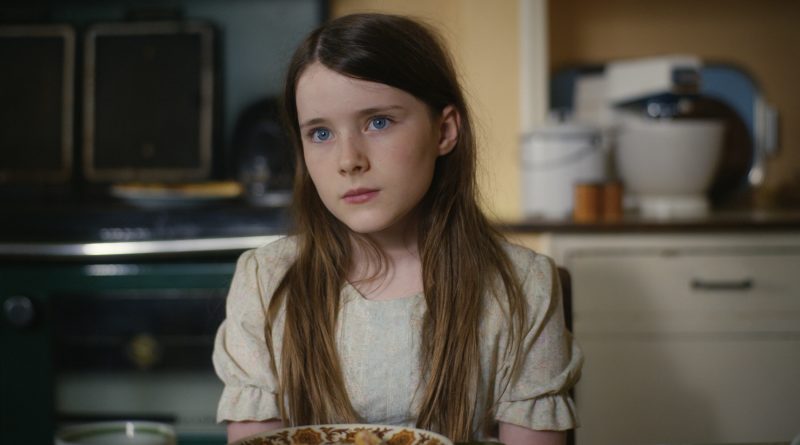 The Quiet Girl, Ireland’s entry to this year’s International Oscar, is the kind of film you watch with a knot in your throat, knowing its gentle beauty and suggestive foreshadowing may give way to sadness, if not outright tragedy, compounded by the unalterable reality of its setting. This time and place – early 1980s rural Ireland – would seemingly have it no other way.

Though it is near impossible not to cry during this film’s final scene, somehow, wondrously, The Quiet Girl (An Cailín Ciúin) doesn’t leave you with a sense of sadness, but rather a feeling of the hope and potential of a child well loved. And that’s the singularity of the tale, based on a short story by Claire Keegan, which captures how one summer in a child’s life, and the meticulous care she’s shown for the first time ever by distant relatives, may well change the course of her life – and her relatives’ as well.

That’s a hopeful message if ever there was one, but it is especially so in the case of Cáit (Catherine Clinch), the Irish-language film’s titular quiet girl, who comes from an unhappy home with an overworked mom (Kate Nic Chonaonaigh) with too many kids to care for, a drunken and wayward father (Michael Patric), and siblings who show no particular loyalty or concern for one another. Cáit prefers to disappear; she’s the family “wanderer.”

Theirs is a dark house with barebones furniture and peeling wallpaper. The few scenes that take place inside the home reveal little sunlight edging in, surely a metaphor for their family life. Asked about her mom at one point, Cáit recounts that she won some money and spent it on jam, apparently a memorable treat for the whole family.

When Cáit is sent away to live for a summer with an older couple, relatives of her mother, she discovers a different kind of life is possible. Eibhlín (Carrie Crowley) and Seán (Andrew Bennett) are the parents she never really had. Though it takes a while for Seán to warm up to her, he eventually does and the two form a deep bond. He is fatherly in a way her own dad, who forgets to leave her suitcase when he drops her for the summer, has never been.

This film captures the reality that children generally don’t have control of their own lives – decisions are made for them. Left unattended, they can quietly shut down. In Cáit’s case, that’s plain to see in the story and her actions, but we also glimpse it in the way she silently observes everything around her.

Cáit’s wide-eyed, thoughtful, uncertain gaze reveals a combination of mistrust and scrutiny that says as much about her character’s upbringing and people around her, as about who she has the potential to become. In a scene with Seán, he advises her never to feel she has to “say anything.” He praises her for being quiet, for only saying what she needs to say. “Many is the person missed the opportunity to say nothing,” he vows.

That aphorism applies equally to the film’s style. Colm Bairéad has directed this film as if to reflect Cáit’s view of the world. It is purposefully sparing with dialogue and lets silence pervade scenes, forcing the viewer to come to her own conclusions about character motivations. More often than not, what’s not said in a scene feels more consequential than what is said.

That verbal scarcity demands especially sincere performances from Clinch, Crowley and Bennett. Clinch is the discovery in a role that would seem to require maturity beyond her years. Some of the most touching moments involve the physical care Eibhlín and Seán give her, brushing her hair for 100 strokes, sponging her arms and legs in what may be her first-ever bath, challenging her to run like the wind, buttoning her overcoat.

Cinematographer Kate McCullough’s camera homes in on the visual details of individual moments. A couple of sequences show moments or memories of their daily activities set to tender singing or Eibhlín counting the hairbrush strokes. These small, daily acts of kindness and generosity reflect how real parents show love to their children. They’re the moments that will propel Cáit forward, and they’re the ones that will linger in your mind long after the film is over.