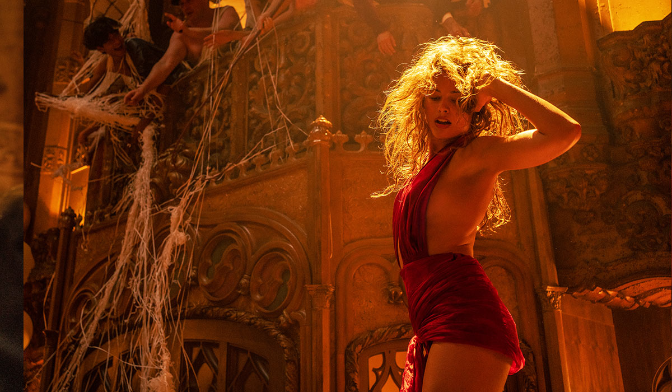 You have to hand it to Damian Chazelle, who should win all the awards for forewarning the audience of the three-hour-long punishment-to-come when one of his opening images is of an elephant in closeup. From the rear. Defecating straight into the camera lens. Well, shit…

Set as the Silent Era roars toward extinction with the coming of sound, the drama seemingly features “a cast of thousands” just like 1925’s Ben-Hur and other early epics but the focus is only on a handful of individuals, who are all on hand for that first wild party: Manny Torres (Diego Calva, a bright spot in the drama), a gofer with a promising future; matinee idol Jack Conrad (Brad Pitt); jazz trumpeter and bandleader Sidney Palmer (Jovan Adepo); seductive enchantress Lady Fay Zhu (Li Jun Li); and Nellie LaRoy (Margot Robbie), a heat-seeking missile convinced of her incipient stardom, a kind of cross between It Girl Clara Bow and the love child of Harley Quinn and Tonya Harding.

The plot finally enjoins once the action moves to a Southern California hillside where in the heady days before sound recording required a strictly isolated environment, multiple productions create a cacophonous confusion of competing images: a Western directed by Dorothy Arzner-like Ruth Adler (Chazelle’s wife Olivia Hamilton), where Nellie gets her first big break; an action picture populated by costumed Skid Row habitues whose safety is no one’s concern; a romance starring Jack that runs the risk of losing the light for an important scene at magic hour when Manny is late returning with the replacement for a smashed camera.

From those scenes, Babylon looks to be on solid footing but Chazelle is less interested in making a movie about making movies than he is in constructing a cheesy melodrama that develops into a sordid, quasi-remake of Singin’ in the Rain without that classic musical’s humor or heart. The connection is eventually made explicit but at first it is only implicit as the characters struggle to adapt to the sound era with echoes from that Gene Kelly-Stanley Donen masterwork: Jack morphs more or less into Don Lockwood, the character Kelly played but with none of that character’s brio, while Nellie becomes a more tragic Lina Lamont, Lockwood’s gauche co-star.

There are other subplots: Palmer transitions from musician to rising star but racism and colorism stand in his way. Good-natured Manny transforms into a producer whose soft spot for Nellie is a constant source of trouble, leading him at one point into what seems like the literal bowels of hell. What starts with the carefree depravity of that opening party gives way to something bleak and ugly.

Babylon’s technical elements are outstanding, particularly Linus Sandgren’s cinematography, Florencia Martin’s production design, and Mary Zophres’ costume design. Francine Maisler deserves credit, too, for her work in filling the cast with a number of famous faces in small but arresting roles, including Eric Roberts, Olivia Wilde, Luka Haas, and Max Minghella. There is a lot of realized ambition on screen for what is ultimately a grueling filmgoing experience. It really does babble on and on and on and on. This is not a love letter to cinema, more like hate mail, odd coming from a director who has been treated well and lauded by his industry. And good grief, don’t summon the ghost of Singin’ in the Rain if it only serves to remind people that, yes, there are far better movies about moviemaking out there than Babylon.