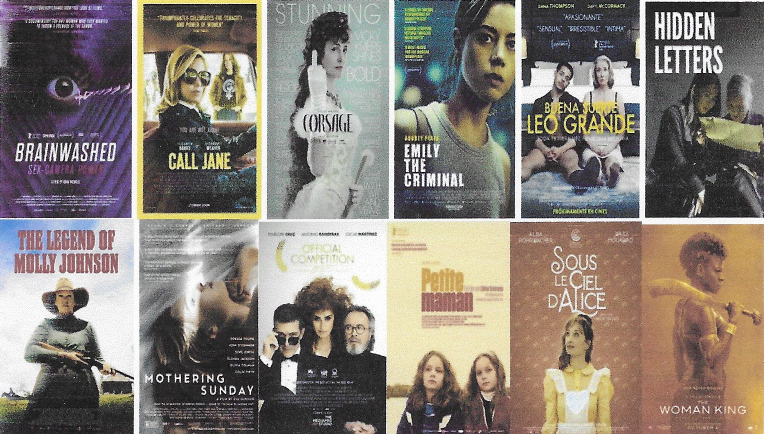 January is usually short on new releases, and January, 2023 is no exception. Team #MOTW seizes this opportunity to recap 2022’s Movies of the Week by highlighting our favorites. Each Team #MOTW member picked a film for inclusion in our ‘best of 2022 #MOTWs’ list. There are many things about 2022 that we want to forget, but these femme-helmed/femme centric films that brought inspiration, understanding, compassion, and respite replete with laughter must not slip into oblivion.

Here is our Bests of 2022 MOTWs list in alphabetical order. Add these films to your watch list. Share the titles with friends. Click on the titles for full reviews. And, in case you want to see the full roster of 2022’s #MOTWs, you’ll find it here. Enjoy! — Jennifer Merin In BRAINWASHED: Sex-Camera-Power, Nina Menkes uses over 170 clips from films from the 1940s to the present from all genres to demonstrate that shot design is gendered. She makes a strong case for the idea that the visual grammar of cinema creates an environment that encourages discrimination, pay inequality, and sexual harassment, both inside and outside the film industry. Cinephiles may find themselves defensive about their favorite flicks, but it’s hard to ignore the many points she backs up with examples. Brainwashed may well fundamentally change the way we watch films, and it should. — Leslie Combemale Back in the late 1960s, when this movie is set, we used to talk about “consciousness raising,” as women began to question the cultural assumptions about their roles and responsibilities and that often included recognition that “the personal is political.” “Call Jane” gives us an example of a woman who learned from her own experience that she could advocate first for herself and then for others. Especially welcome is its understanding of a word we did not know enough to use then, intersectionality, the importance of recognizing the way one injustice piles on another. — Nell Minow Corsage is about Empress Elisabeth of Austria. But this is not another retelling of the life of the beautiful fashion trendsetter, famous for her athleticism and leadership as co-ruler with her emperor husband. Instead, Corsage introduces Elisabeth on her 40th birthday in 1877, as she embraces ever-tighter corsets and brutal exercise routines, and is increasingly marginalized into ceremonial roles and no longer the co-ruler she once was. Director Marie Kreutzer directs Vicky Krieps in a brilliant performance of a smart, innovative woman refusing to go quietly into that good night, in a surprisingly feminist and occasionally surreal telling of the rest of the story. — Cate Marquis A ballsy Aubrey Plaza plays it cool in the title role of first-time feature director and writer John Patton Ford’s thoroughly engaging Emily the Criminal. Like many a millennial, Emily finds herself choked with a load of student debt while sharing an apartment with not-so-friendly roommates. Not helping matters is a minor criminal infraction from her past that makes her undesirable as an employee. — Susan Wloszczyna


GOOD LUCK TO YOU, LEO GRANDE Emma Thompson, who boldly bares it all, literally and lovingly, in Sophie Hyde’s intimate drama Good Luck to You, Leo Grande. Good Luck to You, Leo Grande is never gratuitous or exploitative. Rather it’s empathetic, complex, and bracingly honest. It celebrates desire, connection, and love for both yourself and others. It assures viewers that life is definitely not over in middle age, and it encourages seeing beauty in everyone you meet. By the time Emma Thompson stands naked in front of a full-length mirror, examining herself with a small but clearly appreciative smile, you’ll want to stand up and cheer — or, better yet, do the same yourself. — Betsy Bozdech Violet Feng’s beautifully crafted documentary is about Nushu, a centuries old codex of symbolic letters used by women in China to resist prohibitions against their education and bans to their sharing of knowledge and feelings. Handing Nushu down from generation to generation, women wrote diaries, poems and stories and communicated privately with each other. At present, elders teach Nushu to younger women who are dedicated to carry on the tradition. However, culture-controlling authorities now want to exploit the treasured artifacts of hidden letter writings as tourism attractions. The documentary delves into the controversy that proposed commercialization is causing. There is true drama here. — Jennifer Merin

THE LEGEND OF MOLLY JOHNSON The British Empire’s predisposition towards planting flags in other people’s living rooms fomented parallels in history. One of these lies in the colonization of the American Frontier and the Australian Bush. The seizing of lands, vilification of the Indigenous populations, and the culture of violence beneath a thin veneer of religion were wrought by men who called themselves pioneers. On paper, it is difficult to tell the two apart (this is sarcasm and yet it is also truth). These parallels are what make the Western such an apt genre for 1893 Australia, but when those wild “western” lands are pitched as a metaphor for Aboriginal Australians and untamed womanhood the genre takes a turn. — Sherin Nicole A marriage of convenience proves inconvenient when Paul, a son of society, and Jane, a maid, fall in love against the rules of 1920s England. The tragic reality of postwar times, sons lost and promising futures destroyed, prominent families fake smile through another lunch together keeping up appearances. But, death and suffering are inescapable. Mothering Sunday is a story of love and loss through the decades, a meditation on grief and the choice to thrive. It is one of the best films of the year. — Liz Whittemore Ginormous egos come together to make a film in this slyly funny sendup of moviemaking. An octogenarian billionaire obsessed with legacy purchases a Nobel prize-winning novel and hires a hotshot auteur to adapt and direct the film. She hires two leads: a Method-steeped stage actor and a womanizing international star coasting on looks and charm. Less director than dictator, she puts her actors through their paces during rehearsals and is not above playing cruel, manipulative tricks to achieve her goals. The actors are so different in life experience, artistic process, and level of success that the only thing they have in common is mutual contempt. It is a rocky road to Cannes in this knowing wink of a dramedy. — Pam Grady A fairytale, a ghost story, a spare meditation on grief, loss, motherhood and the delicate mysteries of childhood — Celine Sciamma’s Petite Maman is all these things adding up to a deeply moving, spellbinding film that evokes tenderness and heartbreak in delving into what children can never know about a parent and what a gift it is to imagine glimpsing that precious unknowable, even for a moment. — Loren King Most of us strive for happy lives that are filled with loving partners and family, satisfying work, and pleasant surroundings that meet both our physical and material needs. Many of us are successful in achieving these goals, but unimagined forces can bring the fulfilling lives we work so hard to achieve crashing down around us. It is this erosion of normal lives and social connections that French Lebanese director and co-screenwriter Chloé Mazlo explores in her tribute to her parents and their home country in Skies of Lebanon. — Marilyn Ferdinand The Woman King is a remarkable film directed and co-written by the fabulous Gina Prince-Bythewood, who has dedicated her career to elevating the voices of Black women and characters. The Woman King feels like her proverbial magnum opus, the culmination of two decades since her auspicious debut feature Love & Basketball. Viola Davis gives a remarkable, memorable performance as General Nanisca, with Olivier Award-winning British actor Sheila Atim and Marvel Cinematic Universe veteran Lashana Lynch equally extraordinary as Nanisca’s right-hand woman and protégé. The film explores the twin traumas of sexual violence and transatlantic slavery while never taking away from the spirit, the power of sisterhood. — Sandie Angulo Chen