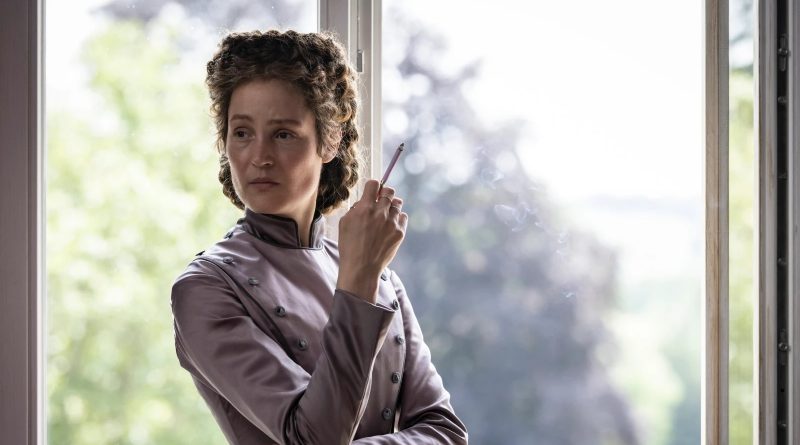 Austrian writer/director Marie Kreutzer knows the many film and television versions of Empress Elisabeth of Austria, consort of Franz Joseph. Wisely, in Corsage, her presentation of this embattled Hapsburg Empress, Kreutzer envisions a distinctive woman, depicting this nineteenth century Elisabeth turning forty, shackled by society’s constraints, requiring her to be seen but not heard.

The title itself, Corsage, identifies the corset laced tight on Empress Elisabeth, but is, more inclusively, a term costume designer Monika Buttinger describes as suggesting “life in a corset.” Emphasized in even more disturbing ways, on two occasions Elisabeth visits mental institutions where she witnesses women literally chained and thrashing about in caged beds. None too subtle, these images contrast with Elisabeth’s frequent, physically liberating sidesaddle horseback rides in country estates. Among her joys, Louis Le Prince brings an early, experimental camera and films her.

Celebrated for her beauty, Elisabeth is repeatedly reminded that her most important asset is, above all, her appearance, her anorexia a result of that. Explicitly, Elisabeth is admonished by husband/Emperor Franz Joseph that “all you need to do is be appealing . . . that’s why you’re here . . . merely to represent.” Franz Joseph adds that he alone guides “the fate of the country.” For re-enforcement of her all-important image, it took maidservant Fanny three hours to braid and coif her floor length hair. But because Elisabeth is clearly intelligent, speaks several languages, and maintains an athletic regimen (though none of these attributes are praised), her rebellious retaliation took the form of defiance, resistance, and depression. She will fake faints to escape from tedious official events, will engage with various lovers, and will use doubles as the Empress for boring ceremonies. Meantime she increasingly isolates herself, hiding her face behind a veil. Elisabeth also retreats to opium addiction with a doctor’s encouragement. To provide her and the viewer some relief, to add humor, several modern songs punctuate dramatized events.

In interviews, director Kreutzer has said of Empress Elisabeth, called Sisi, “She just disappeared right in front of their eyes.” By contrast, fully on display, as Elisabeth, Vicky Krieps triumphs in a stunning performance with complex physical and emotional registers, often within one scene. She animates every moment, verbally and nonverbally. Corsage is primairly in German with English subtitles.