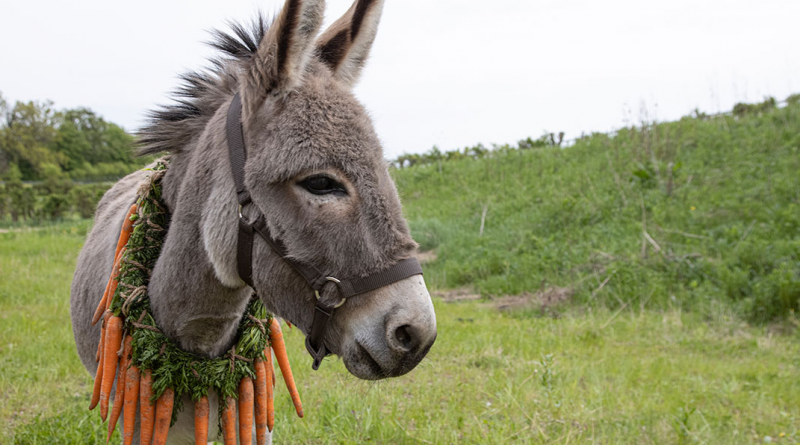 Individuals reveal who they are—values, priorities, empathy—in their interaction with animals. The brilliant, minimalist French director Robert Bresson documented exactly this in his 1966 Au Hasard, Balthazar, documenting the donkey Balthazar’s life. Updating the content, Polish director Jerzy Skolimowski reassesses this world through the donkey EO’s point of view as he experiences his life’s joys and tragedies.

Named for the sound he makes braying, EO first appears in a circus with a devoted trainer, but the circus folds and EO gets moved to a farm. Soon wandering away from there, EO navigates towns and forests, briefly takes up residence at a villa, and roams through diverse populated and uninhabited areas. Throughout his travels, too often he encounters heartless, even despicably cruel people, and, upon occasion, kindness. EO’s treatment reveals the indifference and lack of compassion for this lovable observer of human interaction.

Cinematographer Michal Dymek moves his camera with EO, using color filters and soft focus in some scenes to convey changes of mood. Because of minimal dialogue, EO relies effectively on Pawel Mykietyn’s music to define emotions and establish tone. For his exceptionally expressive compositions, he won this year’s Cannes Film Festival Soundtrack Award.

Eighty-four-year-old co-writer/director Skolimowski says in interviews that “this film is obviously made out of love for nature and for animals.” Bored with traditional, linear narratives, he and co-writer Ewa Piaskowska wanted to experiment with a nonlinear structure unfolding through EO’s predicaments. In a touching moment, when Skolimowski accepted a shared Jury Prize at the Cannes Film Festival, he paid tribute to the six very special, lovable Sardinian donkeys that played EO: Tako the action hero and poster boy, Hola for close-ups, Rocco for the braying, and so on. There and in EO he communicates his heartwarming love of animals, especially those Sardinian donkeys with large, expressive eyes.

On a personal note, the stables where I board my horse also houses a donkey. As a result, I relate on an experiential level with EO, and can report that the donkey, Dinky, with whom I’m acquainted is without question a real character. He more than holds his own with the many horses there, expressing his own endearing personality on every occasion. That we often become indifferent to the animals that populate our lives is a loss for us and them. They provide enormous opportunities to move outside of our own self-absorbed lives, offering amazing humorous and fascinating individuality.

Already the winner of numerous awards, appearing on multiple top-10 list, EO is also included on the short list for this year’s Oscar for Best International Feature Film. It is among the best films of the year, in English, Polish, Italian, and French with English subtitles.