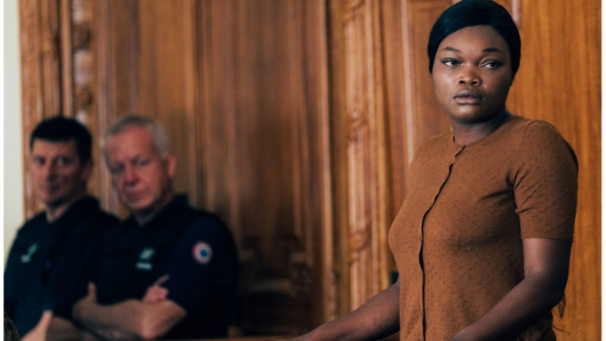 You’ve likely never seen a mother/daughter film like Saint Omer, a courtroom drama that defies the expected histrionics and finality of the genre’s conventions. Instead, writer/director Alice Diop delivers an intimate, unsentimental film that quietly but steadily accumulates in power.

Diop’s story draws on a real-life trial in the small town of Saint-Omer, France in which a young, highly educated Senegalese Frenchwoman was accused of murdering her baby daughter. In Diop’s fictionalized account, Rama (Kayjie Kagame), a writer and university lecturer who at the start of the film is discussing Marguerite Duras’s Hiroshima, Mon Amour, arrives in the town to attend the trial. Rama plans a book that draws comparisons with the Greek myth of Medea (Diop later includes a clip of the great Maria Callas as Medea from Pasolini’s 1969 film).

During the course of the trial, Rama watches intently as the defendant, Laurence Coly (an extraordinary Guslagie Malanda) testifies on the stand. Diop and cinematographer Claire Mathon stage these scenes in long, uninterrupted takes, like theater monologues, that focus on actors’ subtle reactions, body language and shifts in expression. At one point, Laurence looks directly at Rama and offers this stranger a slight smile, perhaps recognizing her as an African woman in courtroom made up mostly of white people. Or, maybe, she senses something more. Rama seems to grow increasingly uncomfortable with Laurence’s calm description of her mental state, her role in the death of her baby girl, and her unshakable belief that it was the work of “sorcery.”

Rama’s empathy begins to haunt her; there are flashbacks to her troubled relationship with her own mother and soon we understand that Rama is pregnant. The disturbing yet unmistakable identification with Laurence grows more pronounced as Rama shares a meal with Laurence’s mother, Odile (Salimata Kamate), who weeps quietly as she watches the proceedings from a front row of the courtroom.

Saint Omer gradually and with subtlety peels back layers to reveal issues of culture and class, racism and misogyny, motherhood and daughterhood, and how Black women struggle to be seen in relationships, families, countries, courts. There is no cathartic conclusion. But Saint Omer ends on a compelling note with Nina Simone’s haunting rendition of Little Girl Blue which never sounded so sorrowful yet defiant.