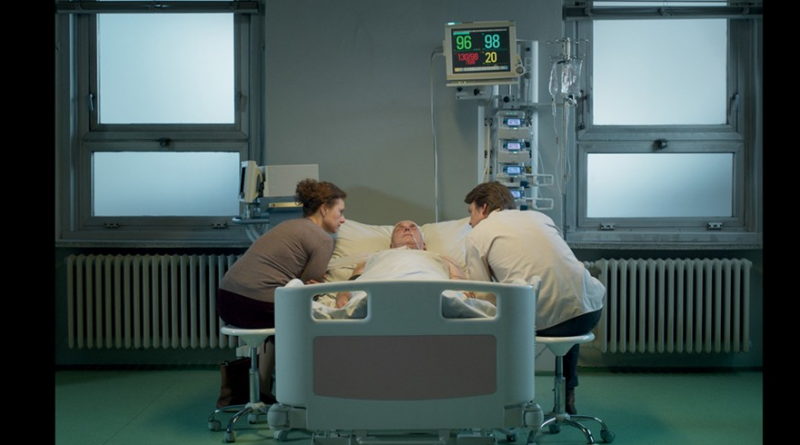 Director Václav Kadrnka’s latest feature Saving One Who Was Dead (Zpráva a záchrane mrtvého) forms the final part of his Absence of a loved one trilogy which includes Eighty Letters (2011) and Little Crusader (2017). Saving One Who Was Dead is a profoundly effective drama about the liminal space between life and death, and how those who care for a loved one on the brink of the end of their lives experience that same liminal experience.

The film opens with a man (Vojtech Dyk) on a hospital bed. He awakens and puts on his heart monitor then looks out the window at construction occurring across the street. He wanders the labyrinthine hospital, all stairs and barred doors. The audience doesn’t know what he is doing there, is he the patient? Eventually we become aware that he is The Son of a man (Petr Salavec) who suffered a stroke due to arrythmia and despite being taken out of his medically induced coma, is not waking up. He meets up with his mother (Zuzan Maurécy) and they undertake the task of trying to find the right combination of words and stimuli that will bring their loved one back to them.

Kadranka takes a common experience and imbues it with not only emotional weight, but with the sense that for those who sit at hospital bedsides waiting for an uncertain outcome exist in a near non-ending loop of repeated frustration and hope; one that defies time itself. We don’t know how long The Mother and The Son have been at the hospital – Kadranka only allows the characters one costume change. We don’t know how many times they have sat with The Father. What we do know is that they are locked in crisis and perhaps the only door to freedom is accepting that The Father may not survive.

Director of photography Raphaël O’Byrne uses a claustrophobic portrait mode for most of the film which enhances Kadranka’s use of repetition to reinforce the banality and desperation of the situation the family are in. The hospital itself is a maze filled with exhausted people. The Son and The Mother both remember The Son’s time at the hospital as a child, and Kadranka places the child at the Father’s bedside. The Son wonders if he too will end up as his father has; “We have the same heart,” he says to him when The Mother is temporarily absent.

Ostensibly a straightforward drama, Kadranka imbues his film with pertinent symbolism and moments of unreality to heighten the psychological state of his protagonists. Even with a defined purpose, to awaken The Father, Mother and Son are adrift. The hospital expands and contracts with their consciousness. There are moments when it is a loud and bustling space, which is how modern hospitals operate, but for the most part it is eerily silent which amplifies the footsteps of the medical staff and other patients as they pass by. Time is constricted and expanded as we follow The Son on his walks through the building – a space that was once operational is now part of building renovations (or perhaps it always was, Kadranka allows for multiple interpretations).

Saving One Who Was Dead requires audience patience. The film is deliberately purgatorial and offers limited respite for either the characters or the viewers. Although Kadranka’s approach to the human dilemma the protagonists face has a resonant veracity for anyone who has been through the interminable and heartbreaking experience of sitting beside someone they love slipping away, the film’s dramatic pull isn’t as engaging as it could be. Perhaps that is partially due to the stoic dialogue between The Mother and The Son, or perhaps the nebulous nature of reality within the film at times diminishes the core tragedy. Yet despite these caveats Kadranka has crafted a piece of art that engages with and subverts its simple set up. Saving One Who Was Dead is challenging viewing but ultimately its innately humanistic approach to the ordinary but life changing experiences many go through make it a valuable addition to the discourse of what it means to love and face loss.