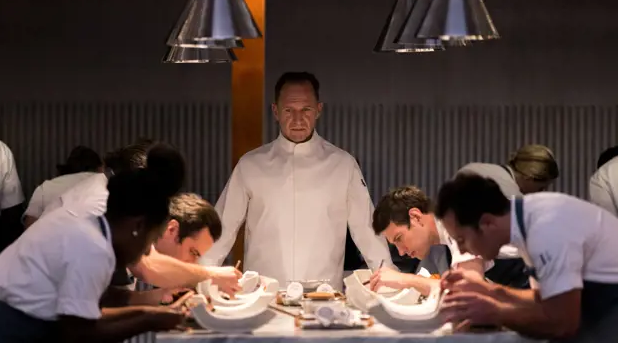 Undoubtedly one of the most bizarrely absurd thrillers of the year, The Menu skewers pretentious ‘foodies’ and the ‘fine dining’ they crave.

A group of privileged epicureans pay $1,250 per person to travel to a windswept coastal island in the Pacific Northwest for what they believe will be a unique gastronomic experience at an exclusive restaurant called Hawthorne, run by world-renowned Chef Slowik (Ralph Fiennes).

Their culinary adventure begins as they’re met at the dock by unflappable Elsa (Hong Chau), who gives them a tour of the self-sustaining grounds as she escorts them to the café: fish are fresh out of the sea, vegetables harvested from the garden and meat slaughtered/smokehouse-cured from their own herds. The staff live in spartan crew quarters, while Chef dwells alone in a separate, off-limits bungalow.

Hawthorne’s lavishly molecular tasting menu is built around the Chef’s food philosophy, which he explains in fervent detail as patrons watch how his staff meticulously measures, chops, sautés, swirls, constructs and garnishes each course – from amuse-bouche to breadless bread plates to dessert.

As the evening unfolds, there are many unexpected, unduly malevolent surprises for the stunned guests as multi-layered secrets are revealed and tension mounts.

Scripted by Seth Reiss and Will Tracy, this dark comedy is directed by Mark Mylod (“Succession,” “Game of Thrones”) who hired Dominique Crenn, chef at San Francisco’s three-Michelin-starred Atelier Crenn, to create the elaborate menu. The actual dishes were assembled by Kendall Gensler, a New Orleans food stylist whose task was to make them look appetizing and freshly-plated after hours of filming.

On the Granger Gauge of 1 to 10, “The Menu” serve up a sinister, satirical 7, streaming on Prime Video, HBO Max, Vudu and RedBox.