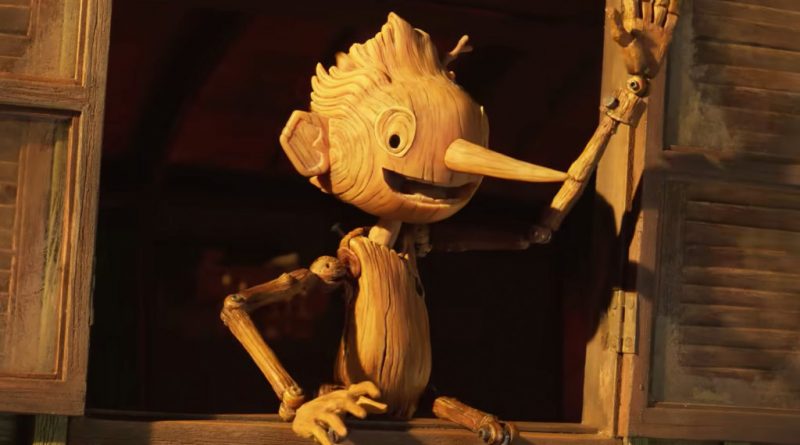 As he’s restoring the crucifix in a small Italian church, the carpenter Geppetto (voiced by David Bradley) loses both his wife and 10-year-old son Carlo when a W.W.I bomb explodes. Devasted with grief, he retreats alone to his tiny cottage.

Two decades later, the widower Geppetto carves a simple stick figure of a young boy (voiced by Gregory Mann) which is miraculously brought to life by a benevolent Wood Sprite (voiced by Tilda Swinton); he is named Pinocchio.

Gullible to a fault, Pinocchio assumes everyone is honest. Since naïve Pinocchio is incapable of discerning right from wrong, Sebastian J. Cricket (voice by Ewan McGregor) is assigned to guide him – which proves to be a challenging task.

In this interpretation, Pinocchio’s nose ‘grows’ not only when he tells a lie but also when he is not true to himself.

That happens often when he’s in the presence of villainous Count Volpe (voiced by Christoph Waltz) and his monkey Spazzatura (voiced by Cate Blanchett) who convince him to join their travelling circus to earn funds for the family.

Significantly, as he grapples with the religious aspects of life-and-death Papa Geppetto also learns a valuable lesson about individuality, noting: “Pinocchio, my child – I was trying to make you into someone you were not. So – don’t be Carlo or anyone else. Be exactly who you are! I love you exactly as you are…”

It’s a far cry from Disney’s sanitized 1940 Pinocchio and the many versions that have followed, including Robert Zemeckis’ mid-2022 Lionsgate adaptation with Tom Hanks as Geppetto.

FYI: Composer Alexandre Desplat had all the instruments for his music made of wood. Significantly, the film begins and ends with a pinecone falling off a tree.

On the Granger Gauge of 1 to 10, Guillermo del Toro’s Pinocchio is a deeply sad, emotional 8, an animated Oscar contender that’s streaming on Netflix.