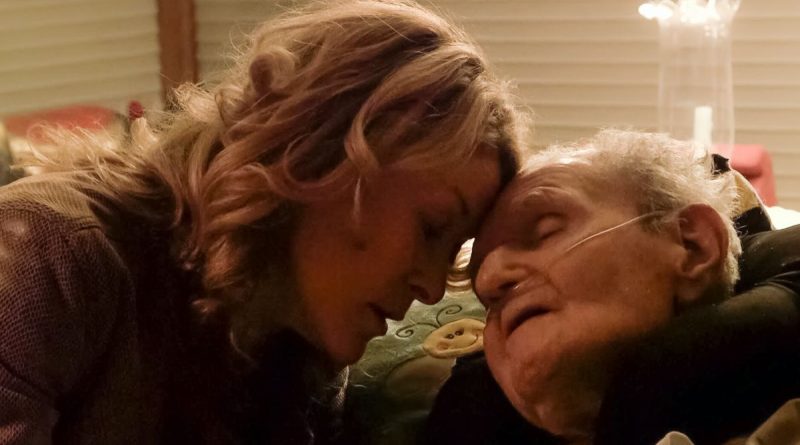 Last Flight Home is a moving documentary about a family helping their elderly patriarch fulfill his wish to die. It’s so intimate, you’ll feel privileged to have been allowed access to their remarkable journey.

92-year-old Eli Timoner was the founder of Air Florida, whose company slogan was “Fly a little kinder.” A philanthropist and seemingly all-around good guy, he experienced a stroke from a freak accident in 1982 that left one side paralyzed. After 40 years of living that way, he was determined to put an end to his suffering and take advantage of California’s End of Life Act.

With his family rallying around him – as they unhesitatingly did through four decades of the downhill trajectory of his life – he prepares for death on his own terms.

Eli’s daughter, Ondi Timoner – an award-winning filmmaker in her own right – has crafted a loving tribute to her father that also serves as a primer on the legal process of ending a life. She covers all the practicalities, from Zoom appointments with doctors to teaching her dad how to hold the fatal glass of medication himself since no one is allowed to do it for him.

She also covers the importance of closure, documenting Timoner’s wife, kids and grandkids as they ask him their final questions and make sure he is at peace, leaving behind no regrets. Some of the most beautiful moments of the film occur between Timoner and his daughter, Rachel, who is also a rabbi. She talks him through the failures that still torment him, reminding him that he has been a resounding success at the most important thing in life: love.

As viewers, it’s impossible not to get emotional watching Timoner say goodbye to every person who’s ever meant something to him and to hear “I love you” from each one. Even Rachel Maddow – who’s so important to him, he times his death not to interfere with her show – makes a special video message for him.

We should all be treated with the same dignity and compassion as Timoner, a man beloved by so many. With his genial and gentle personality, he made it easy for people to care about him – a good reminder for us all. Ultimately, what is most profound about Last Flight Home may be not just what it shows about death but what it shows about life.