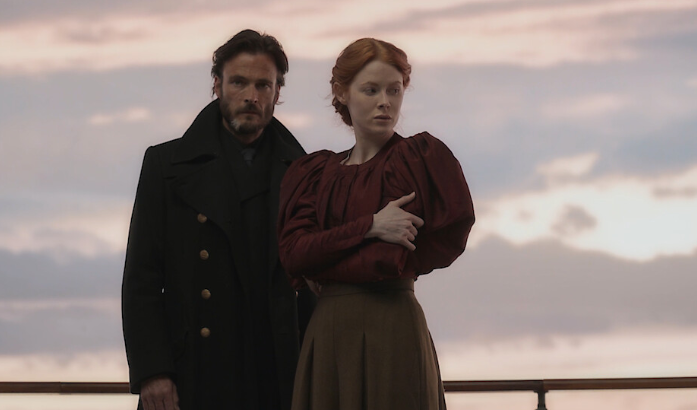 When a trusted friend recommended the supernatural Netflix sci-fi series 1899, he urged me to see it quick – because – despite audience enthusiasm and positive reviews – it’s been cancelled. So I did – joining legions of bewildered viewers, wondering why there won’t be a second season.

1899 begins as Maura Franklin (Emily Beecham) sets sail on the Kerberos, a luxury liner bound from Southampton to New York. Her fellow First Class passengers are in the dining-salon when a Third-Class passenger, Krester (Lucas Lynggaard Tenneser), bursts in, pleading for a doctor.

Trained in medicine but not allowed to practice in England, Maura responds, following him below to help Tove (Clara Rosager), a pregnant Danish woman, emigrating with her deeply religious family.

Soon after, world-weary Captain Eyk Larsen (Andreas Pietschmann) receives strange coordinates via the telegraph machine. Could they be from the Prometheus, a sister ship that recently disappeared?

Curious, Eyk orders his crew to alter course to find the Prometheus, much to the chagrin of passengers eager to begin a new life in America – like Angel (Miguel Bernardeau), a wealthy Spaniard, travelling with Ramiro (Jose Pimentao), a faux Portuguese priest, and Hong Kong’s Ling Yi (Isabella Wei), accompanied by her strict mother Yuk Je (Gabby Wong).

Once spotted, the Prometheus appears to be deserted. But it isn’t. There’s a mysterious, trench coat-clad man, Daniel Solace (Aneurin Barnard), and a secretive mute boy (Fffyn Edwards) locked in a cabinet.

FYI: The Kerberos (Cerberus in English) is named for the three-headed dog guarding Hades. The ghost ship Prometheus takes its name from the Greek Titan who stole fire from Olympus and gave it to Man. Each of the eight episodes ends with a classic rock song relating to the plot and/or foreshadowing the next installment.

So why did Netflix not renew this spooky, genre-juggling maritime mystery for another season? Was it a tax-write off? Forbes concluded: “Netflix is becoming a graveyard stacked with dead series and unfinished conclusions.”