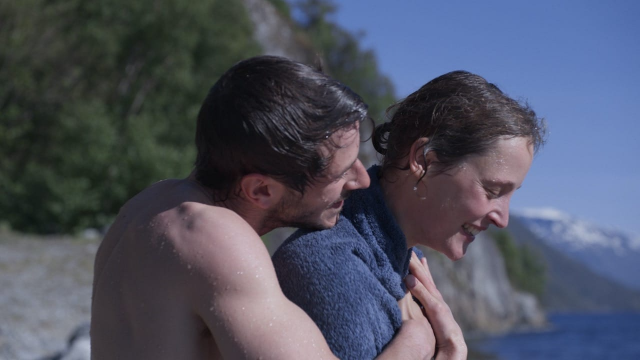 The central question posed by Emily Atef’s gentle yet unsentimental drama about terminal illness is “What do the dying owe the living?” Hélène Mouchet (Vicky Krieps) lives with her uxorious spouse Matthieu (Gaspard Ulliel) in Bordeaux. They are profoundly in love, desperately so, but at age 33, Hélène has been diagnosed with Idiopathic Pulmonary Fibrosis, an almost certainly terminal lung condition. With only a fifty percent chance of surviving a double lung replacement, if a donor can even be found, Hélène and Matthieu must come to terms with this debilitating illness and death.

Hélène is increasingly isolated from her circle of friends. At a dinner party, clumsy remarks are made and an acquaintance tries to hide the news of her pregnancy from her. Hélène leaves after a brusque announcement that just because she’s dying doesn’t mean that people need to treat her differently. Of course, people do treat the dying differently, which is why she connects with a Norwegian blogger named Mister who approaches his terminal diagnosis with zero sentimentality and dark humor. Trying to find some outlet that connects with her own complicated feelings about her diagnosis, all she finds elsewhere is suffocating concern or ludicrous “positivity” – whether that be from random sites on the internet, her mother, or Matthieu.

Mister, whose real name is Bent (Bjørn Floberg) is the person who tells her “The living cannot understand the dying,” and reveals that he loathes healthy people. Hélène connects with his honesty and decides that she needs to get out of Bordeaux to consider her options, more specifically she needs to get away from Matthieu who reminds her every day of what they will never be again.

When Hélène arrives in a beautiful Norwegian town overlooking a fjord, her connection deepens with Bent who, although not exactly representative of his online persona, is the one person who looks at her with clarity and a shared empathy. Norway is magically captured by cinematographer Yves Cape and there is a sense that despite still struggling to breathe, Hélène is for once not suffocating.

Essentially a three-hander that works with the relationship between Hélène, Matthieu, and Bent, More Than Ever is a deep character study about the impossibility of knowing what is best to do in a situation few people are ever prepared for. Matthieu wants Hélène to try every available option to live, yet even he acknowledges that living with her is like being with someone who is already gone.

Atef and fellow writer Lars Hubrich don’t give any of the characters easy solutions because there are none. What Atef does is give Hélène and Matthieu an understandable dignity to both of their positions. Bent somewhat sits in the middle as someone who is also dying but can see that Matthieu’s battle to understand Hélène’s choices is valid.

More Than Ever is a film that is suffused with both romance and melancholy, yet it never becomes a melodrama. Through the extraordinary performances of Krieps and Ulliel (whose own untimely death overhangs the film), the audience is asked to empathize but not judge. Atef’s work is heartbreaking but clear eyed. It is brimming with intimacy and loss. What do the dying owe the living? Atef answers with one word: honesty. It is also what the living owe the dying. The truth is complex and often hard to understand, but it is the only thing that allows any of the characters the dignity they all deserve.

More Than Ever is opening in UK/ROI cinemas in January 2023 and will be showing at the Europa! Europa Film Festival in Australia in February and March.