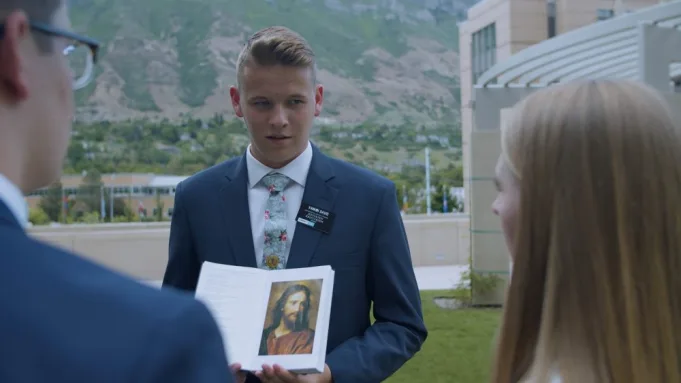 As someone who immediately gets their back up when people try to force their religious beliefs on others, I was very interested in watching The Mission and learning more about the Mormons – whose main goal seems to be just that. I wanted to understand their values, why missionary work is so important to them, what it adds to their own lives. By the end of the film, though, I was no closer to answering any of those questions.

Tania Anderson’s documentary starts off by explaining that The Church of Jesus Christ of Latter-day Saints (LDS) sends tens of thousands of young people around the world to proselytize with their holy text, the Book of Mormon. Her film follows four of them as they prepare to head off on a mission to Finland – a country with a population of more than five million, only 4900 of whom are LDS.

Before embarking on their two-year mission away from family, friends and the ordinary life of an American teenager, though, these nice, clean-cut kids must spend nine weeks at the Missionary Training Center, where they try to learn Finnish and are briefed on how to approach potential converts. For the most part, they’re eager and willing – this is what they’ve been waiting to do since they were born, after all – and they give it the old college try, although it’s hard to believe they will actual convert anyone.

Once in Finland, their efforts are constantly thwarted as most people on the street ignore them and pass them by, despite their friendly greetings. “I believe in evolution!” exclaims one person but that’s about as dramatic as it gets. When two of the girls do get invited into a family’s home to make their case, their hosts gently push back on some of the “facts” they profess. None of this deters the missionaries, who keep smiling and nevertheless persist.

Anderson, in her first feature-length documentary, plays it too safe, keeping everything on a superficial level and never digging for real truths or insights. The only revelation – to me, at least – was that it seems like the real point of the missions is to simply ingrain the missionaries themselves, to make them feel like they accomplished something and keep them invested in LDS. A mission is more a rite of passage than a productive activity and I’m not sure where any of these kids will go next or what they will do with their lives other than raise children to continue the cycle.

Doctrine is barely touched on in the film – probably because misogyny and the lack of reproductive freedom opens too many cans of worms – so it’s hard to say if the missionaries actually believe what they preach or if they even understand what it means.

I went into the documentary thinking of LDS as more of a cult than a religion and, unfortunately, The Mission didn’t convert me.