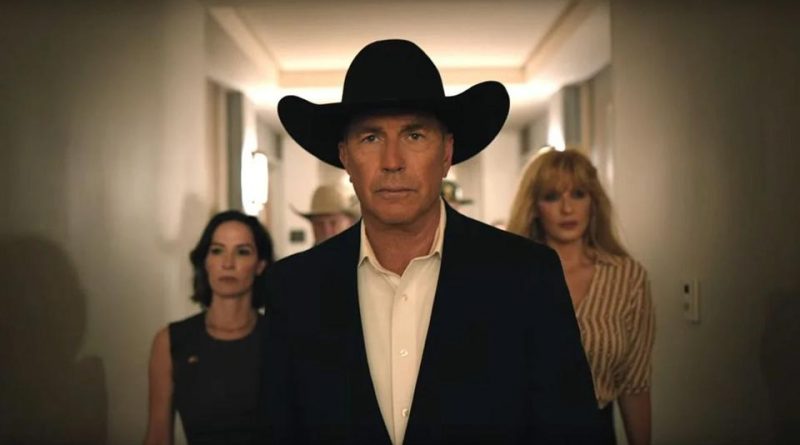 With Yellowstone currently wrangling its fifth successful season, its creators – Taylor Sheridan and John Linson – have lured audiences once again into the interconnected Big Sky mythology of the American West, as epitomized by the dysfunctional Dutton dynasty.

Gruff John Dutton (Kevin Costner) presides over the sprawling Yellowstone Ranch, the largest in Montana. He is so determined to preserve its rural heritage that he runs for Governor and – to no one’s surprise – wins, thwarting the ambitions of his rebellious adopted son Jamie (Wes Bentley).

“I am the opposite of progress. I am the wall that it bashes against,” declares the new, ultra-conservative Governor. As he ruthlessly tells a group of Chinese tourists who are stunned by the amount of land he owns: “This is America. We don’t share land.”

If you look/listen closely during Episode 7, when John Dutton learns of a possible brucellosis infection among his cattle, he’s so frustrated that he almost breaks a Swaharovski crystal decanter.

“That’s 100 years old and belonged to your grandfather,” warns Beth. “Break something else.”

This fifth season is comprised of 14 episodes which will air in two installments, the second beginning Sunday, Feb. 5th.

The Dutton family has owned the Yellowstone since 1883. That prequel series detailed their westward journey from Texas in a wagon train across the great frontier, showing how John Dutton’s great-grandfather, Civil War veteran James (Tim McGraw) and his wife Margaret (Faith Hill) founded the Dutton ranch on a spot of land chosen by their daughter Elsa (Isabel May) for her gravesite.

During that era, as an Indigenous man steered James to Paradise Valley, he warned him that, in seven generations, his Native American people will reclaim their land from the Duttons.

Narrated by Elsa, the spinoff 1923 series delves into how the feisty Duttons maintained Yellowstone as a cattle ranch throughout its darkest and most depressed era. “Violence has always haunted this family,” she intones. “Where it doesn’t follow, we hunt it down. We seek it.”

“Upon my father’s death, my mother wrote to his brother, begging that he bring his family to this wild land and save hers,” Elsa explained. So childless Jacob Dutton (Harrison Ford) arrived at the ranch with his steely, Irish-born wife Cara (Helen Mirren) to take charge in 1894.

Coping with severe draught, the Dutton family adversaries are wily Scottish sheep-herders, led by Banner Creighton (Jerome Flynn), who cut through the Dutton fences, allowing their flocks to overrun the coveted grasslands, inciting a range war.

“My concern is survival,” growls Jacob. As Livestock Commissioner, Jacob launches the beginning of the Dutton political dynasty, opposed by villainous Donald Whitfield (Timothy Dalton) who offers to bankroll his own Paradise Valley claim.

One night in a bar, he meets beautiful Alexandra “Alex” (Julia Schlaepfer), a British socialite who impetuously runs off with him, determined to share his adventurous life.

Following a close call with a pride of lions, Spencer and Alex are enjoying a romantic getaway on an island in Zanzibar, where he receives an urgent letter from his Aunt Cara, detailing how his brother John was killed by thieves and his bedridden Uncle Jacob was severely injured.

That’s when – in Episode 4 – you can spot Spencer drinking whiskey from a Swaharovski crystal decanter and glasses that resemble those in the current Yellowstone.

“We need to book passage to America,” he says. But will they get to Montana in time to save their family?

Intercut through the eight-episodes, there are shocking scenes of how hapless Indigenous girls are routinely kidnapped from their families and sent to a rigorous Catholic residential school, run by cruel nuns like ruler-wielding Sister Mary (Jennifer Ehle), supervised by religious zealot Father Renaud (Sebastian Roche).

For over a century, the United States funded governmental boarding schools designed to strip away Native American culture through sadistic mental and physical abuse, forcing Indigenous girls to accept white Christian values. Since one of the incarcerated teenagers is Crow-speaking Teonna Rainwater (Aminah Nieves), she’s probably an ancestor of the current Chief Thomas Rainwater (Gil Birmingham).

Some of these schools stayed open until 1969 – so it’s all quite timely. Just last year in Canada, there was a harrowing discovery of mass graves in residential schools.

Serving as advisor and cultural anchor to Taylor Sheridan, actor Mo Brings Plenty keeps it as real as possible, particularly in sequences that involve Native American history and rituals. Born on the Pine Ridge Reservation in South Dakota, he grew up in the Lakota Nation.

On the Granger Gauge of 1 to 10, “The Yellowstone Trilogy” is an engrossing, highly entertaining 8, streaming on the Paramount+.