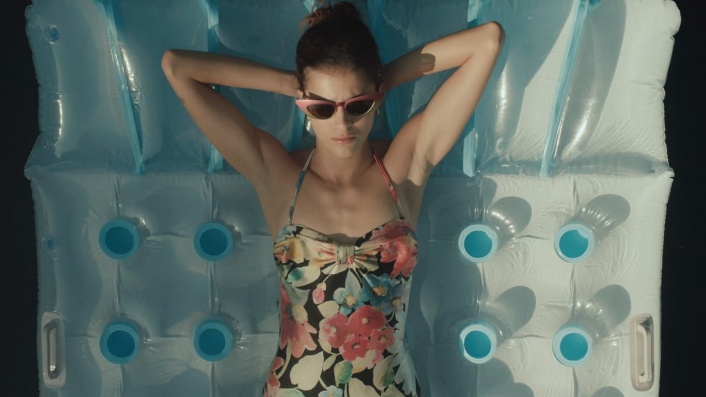 The titular protagonist of Carolina Cavalli’s delightfully absurd yet heartfelt film, Amanda has one of the worst cases of arrested development for a twenty-five-year-old in recent cinema history. Amanda (Benedetta Porcaroli) comes from an extremely well to do Turin family who own a chain of pharmacies, yet she refuses their work and privilege (even though she lets them pay her bills) and blames them for taking her away from potential friends as a child and therefore rendering her unable to form relationships as an adult.

Amanda is perpetually fifteen, or even younger at times. She’s brilliant, devious, spikey, absurd, and yet somewhat wonderful. Marching across the streets of Turin in her odd (and rarely changing) costume of boots, an eighties inspired peter pan collar shirt, and a granny vest, Amanda is constantly sticking her middle finger up at almost everything.

Amanda is a rebel – at least she’s trying to rebel against her family, especially her well-integrated sister, Marina (Margherita Missoni), but at heart she’s deeply lonely and somewhat deliberately dispossessed. The only people she seems to have any relationship with at all is her family’s housekeeper Judy (who saved her from a near drowning experience as a child) and her quirky Jesus loving niece, Stella. Amanda’s mother, Sofia (Monia Nappo) has essentially banned her from socialising with Judy and decides that she will make friends with her once childhood companion, Rebecca (Galatea Bellugi) the daughter of her own friend, Viola (Giovanna Mezzogionro).

Amanda is excruciatingly lonely. She chats to her Siri-like phone assistant who she has call her “Sexy Mama” and uses a form of Chatroulette on the internet to try to make connections with people (most of whom just want to jerk off). She goes to illegal raves and stands by the toilet pretending she is waiting for a friend. There she spots a guy whose name is never revealed (Michele Bravi) and after a single conversation with him and ‘date’ at a diner decides he is her boyfriend. She made the same decision after kissing a guy she met at a Paris cinema once. Amanda seems to have little idea how adult relationships work.

Deciding that she will make friends with Rebecca because she is told they were once friends as children, and she feels that her family stopped her having a best friend by moving away from Turin and thus she is owed the relationship with Rebecca. Becoming friends with Rebecca is not as easy as it seems the young woman has decided to become a social avoidant shut-in who lives in her bedroom. It takes all Amanda’s wiles and wit to get Rebecca to accept her, and once she does the two have a slightly combative relationship that echoes that of children. The play games together in Rebecca’s room. There is nothing grown-up about the friendship until it is threatened by Rebecca’s stern therapist, Anna.

Amanda is a delightfully odd creature. The things that excite her seem bizarre. She diligently spends money at a supermarket to gain points for an electric fan that she could easily buy. Once she finally gets the fan she is awed that when she tries to sell it to Emilio’s Electronics she speaks to the owner Emilio in the phone.

Cavalli’s film is an absurdist coming-of-age story that is reminiscent of something Lanthimos or Baumbach might have put together but remains completely her own work. Exploring Amanda’s odd mental state would not be possible without the right actor for the role who keeps one invested in Amanda’s adventures. Porcaroli is enchantingly wicked as Amanda and makes it believable that such an oddball can exist, and more importantly makes the audience wish for her success, whatever form Amanda decides success is (even if that’s stealing an old horse). Supporting turns from Bellugi and Missoni are excellent as each represents a path that Amanda could have taken but did not. One of the more intriguing characters is Rebecca’s mother, Viola who is spaced out of her mind on medication and alcohol and lives in her own Carrollian world.

Amanda is about the misfits in society. One gets a sense that Amanda will never fit in, but somehow that isn’t what the audience wants for her. If she just follows her dream, whatever that dream is (she doesn’t really have one) and gets by, then that’s good enough. Amanda does overcome her loneliness and does it by aggressively fighting for herself. When her mother says to her “Do you know why you don’t do anything, Amanda? Because you are too busy doing nothing,” some of that sinks in. Amanda does do things, she does commit to her friend, she does make small but necessary changes.

Amanda is an effective deadpan comedy that serves as a fascinating character study of a mercurial protagonist. It’s funny, it’s wicked, but there is a wisdom to the film that gives it weight and makes the audience pay attention to the mental state of Amanda and care about what happens to her, no matter how alienating she tries to be. Cavalli’s debut is a delight and for all the middle fingers it sticks to the upper middle class, it knows exactly its own internal contradictions – much like Amanda herself eventually realises.

Amanda played at TIFF, VFF, and is playing at the Europa! Europa Film Festival in Sydney and Melbourne in Australia.