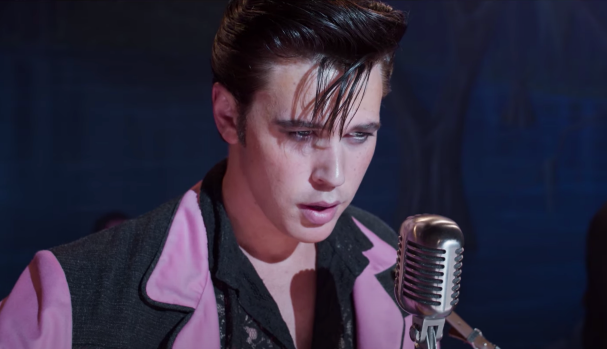 You know his songs, but how well do you the man behind the music? Elvis Presley changed the world of rock and roll, and in Baz Luhrman’s new film, Elvis we get a deeper look at what inspired his sound and moves.

The film is told through the perspective of Elvis’ manager, Colonel Tom Parker, played Tom Hanks. It’s an interesting choice, considering he is a villainous character. He shares Elvis’ story from birth to after death. At a young age Elvis was fascinated by R & B singers and the energy of gospel music from his small town of Tupelo. He eventually used that energy to bring black music to white people. His music and thrusting dance moves caused outrage, but it also filled a room of excited fans. With his success came betrayal, drug addiction, backlash, and an everlasting mark on the world.

Visually, Elvis is breathtaking and with bedazzling effects, but story wise, the film drags. Perhaps making Colonel Tom Parker such a major role wasn’t a great idea. Hank’s portrayal of Colonel Parker comes off like a caricature and it’s hard to take him seriously.

Plus, we don’t want his story of Elvis, he lied and took advantage of the singer. In addition to that, the film is way too long, there were many unnecessary scenes that could have easily been cut to pick up the pace.

Thankfully, Austin Butler is sensational as Elvis, giving the best performance of the year so far, and one to remember come award’s season. Butler is entrancing as he embodies The King vocally and physically. His performance alone, is why anyone should watch this movie.