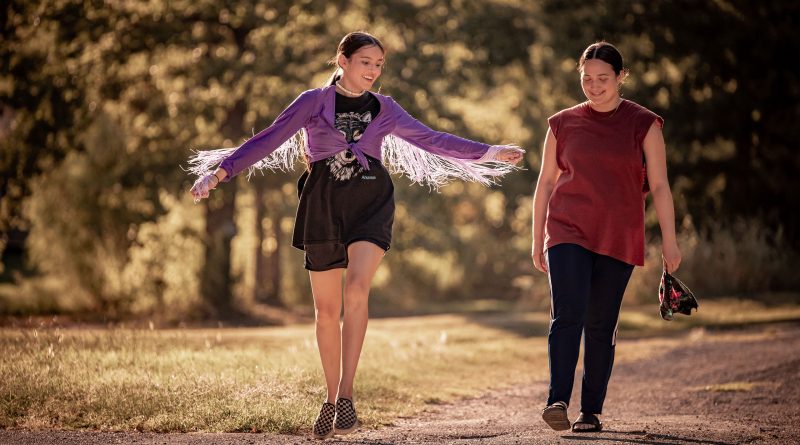 Fancy Dance, an indigenous film in search of distribution, premiered on January 20th at Sundance. It is so good it has me checking the Sundance acquisition news every few hours like a mom of someone hoping to get drafted into the NFL. It has everything an award-winning movie needs: a plot with high stakes, strong performances, good character development and interaction, deeper cultural significance, and solid entertainment value. Fancy Dance also features BIPOC female creatives both in front and behind the camera, including the use of music by Choctaw composer Samantha Crain, and cinematography by Latinx filmmaker Carolina Costa.

Directed by queer and indigenous filmmaker Erica Tremblay, and co-written by Tremblay and Miciana Alise, the film centers on Jax (Lily Gladstone) who is trying to balance caring for her niece Roki (Isabel Deroy-Olson) with searching for her missing sister. When child protective services places Roki with her white grandparents, Jax starts a late-night roadtrip with Roki to take her to the powwow where Roki believes they’ll find her mom, putting them both in danger. The film examines the Missing and Murdered Indigenous Women issue through a narrative that portrays it as unglamorous and as tragic as it is in real life, while also creating a realistic portrait of what kinds of damage the MMIW epidemic has done to real people and families inside Native populations for decades. As much of a downer as that sounds, the film is so grounded in love, Jax’s love for both her missing sister and her niece Roki, that there is beauty in every scene the two characters share. That’s due in no small part to Gladstone’s performance, and her powerful chemistry with Leroy-Olson.

Lily Gladstone, who hails from the Kainai, Amskapi Piikani, and Niimiipuu Tribal Nations, has been more and more in the spotlight in the last few years. Bursting onto the scene in 2016’s Certain Women, where she won multiple awards on the festival circuit, she is the lead in Martin Scorscese’s Killers of the Flower Moon. Fans curious about her chops will find a lot to love in her subtle, nuanced performance as the stoic Jax.

Tremblay is from the Seneca-Cayuga Nation, and one of the seeds of the idea for Fancy Dance came out of wanting to see the Cayuga language in familial and familiar use onscreen. There are estimated to be less than 20 first-language Cayuga speakers left alive today. So passionate is Temblay about the importance of language to the legacy of Native peoples, she moved to a reserve in Canada and studied the Cayuga language in a three-year intensive program. For Fancy Dance, she imagined a world in which family spoke their own words fluently among themselves and their people. Gladstone, Deroy-Olson, and many of the other cast members make how they speak feel very easy and beautifully intimate onscreen, but it was, in fact, an exception, not the norm. The commitment to speaking Cayuga extended offscreen, where Cayuga phrases for things like “action”, “cut”, and “that’s a wrap” were embraced by the entire cast and crew.

Hopefully Fancy Dance will be landing in theaters across the country or on a streaming service that offers the level of promotion it deserves. That would be giving voice to indigenous issues and amplifying the work of some of the best Native creatives, while allowing the film’s moving story to grab everyone who ever had a mother or sister squarely in the feels.