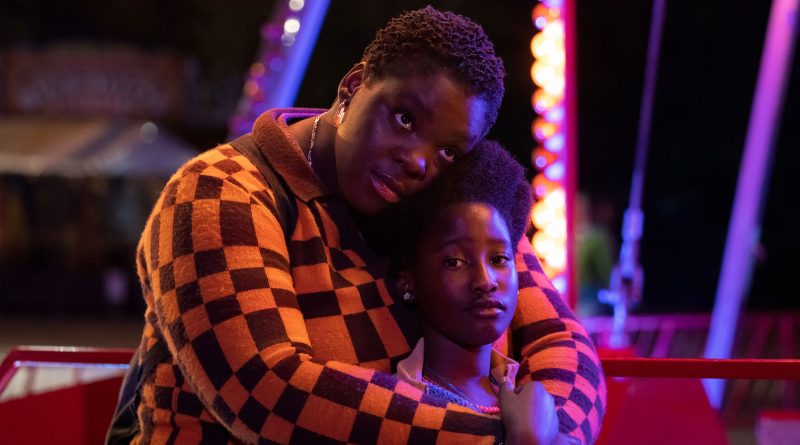 Writer/driector Adura Onashile’s lyrical drama Girl is a beautiful study in mother/daughter love, even as it explores the impact of trauma and its potentially destructive influence on motherhood. This emotional and tender story anchors itself in one very specific example in which race, class, and gender all play a very important role. It is in its specificity that Girl finds a universality that will connect with nearly everyone.

“I will keep you safe.” That’s a mantra that young mom Grace (Déborah Lukumuena) often repeats to her 11-year-old daughter Ama (Le’Shantey Bonsu). She has built that safe space in their tiny high-rise apartment, where if outside there are risks to their physical, emotional, and financial safety, inside there is peace, comfort , and poetry only a close mother and daughter can share. But safety comes at a price, and it is keeping Ama is doing the important job of becoming herself, discovering her own joys and passions as a near teen. As Ama stretches herself beyond their insular life together, Grace must learn to trust her daughter and at least some outsiders who might make it safe for her to find who she really is, while at the same time, do the terrifying job of finding herself, apart from who she is as a mother.

In France, Lukumuena is known for her performance in 2016’s Divines, for which she won Best Supporting Actress, or Meilleure actrice dans un second rôle, at the César Awards. Those who saw her in that film will understand her range taking on this haunted character, who seems to believe the greater the economy of movement, the less the chance she and her daughter will be at risk.

Onashile’s filmmaking, embraces a diversity of artistic modalities, with the help of inspired collaborators. Cinematographer Tasha Back’s visual palette has a depth of color that itself often feels like a cocoon, though it is also leveraged, along with Soraya Gilanni Viljoen’s production design, to lean into the emotional claustrophobia Ama strains against as a growing young lady. Music, too, plays an important part in storytelling here. Nigerian composer Ré Olunuga’s creates soundscapes that are siren songs, offered via female choral vocalizations, for times in which Grace is on her own or with her daughter. Juxtaposed with that are the expansive, joyful tunes by the likes of Ami Yerewoto and Ibeyi that create the soundtrack for Ama’s self-discovery. The film as a whole, then, comes together as very impressionistic, yet self-assured.

Girl is both delicate and intense, and catches the viewer up in its waves. It’s clear Onashile makes space for the artists with whom she is collaborating to express themselves while still building a cohesive piece together. She has chosen them well, trusted them to do their best, and the results show up onscreen. That’s quite something for a feature film debut.