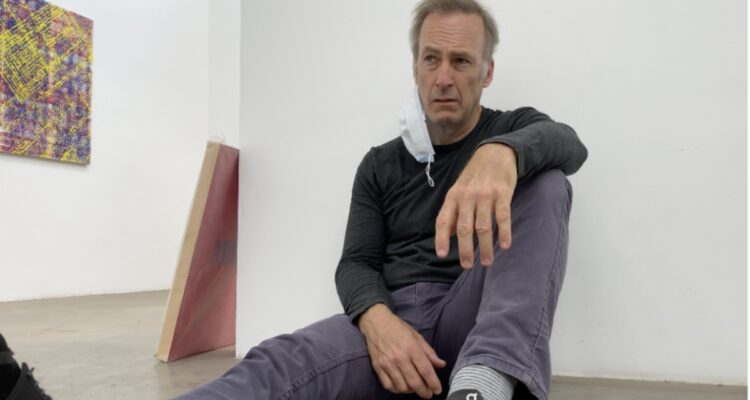 The drama Life Upside Down taps into those feelings that gripped so many during the COVID-19 pandemic and lockdowns. Inertia, ennui, limbo, and isolation. The restlessness of trying to better ourselves, stay centered, or at least sane.
And for some, noticing how quarantining revealed more than a few cracks in a relationship.

Writer-director Cecilia Miniucchi and the cast, including Bob Odenkirk, Radha Mitchell, and Danny Huston, deserve credit for filming much of this remotely using computers, iPads, and iPhones over two months in Los Angeles in 2020. (The ending credits show some behind-the-scenes footage of how this worked, with plenty of tripods for the handheld devices.)

Yet while the setup begs for introspection, the script unfortunately doesn’t feature characters whose inner journeys are all that interesting. Their interactions—largely on the phone or video chats—also fall flat. Embracing the premise of pandemic isolation winds up being the film’s biggest flaw.

Miniucchi (Expired) establishes the connections among these people at an art gallery opening held before the pandemic hits. Married artist Jonathan (Odenkirk, Better Call Saul) is thrilled to have his own exhibition space and sneaks off for a few minutes with his mistress, Clarissa (Mitchell, Girl at the Window), a professor. Clarissa, meanwhile, is a close friend of intellectual author Paul (Huston, Marlowe), married to the younger Rita (Rosie Fellner, Traveling Light).

A rotating shot of the Los Angeles skyline and news reports soon telegraph that the characters’ lives are topsy-turvy. Surprisingly, thoughts about mortality rarely pop up, aside from a few phone calls about a relative’s health.

Instead, quarantining with his wife, Sue (Jeanie Lim, Mommy Is a Murderer), Jonathan hides out around the house while trying to arrange video trysts with Clarissa. Sue inevitably interrupts, leaving him and Clarissa frustrated.

Clarissa vents to Paul, who says she needs to find someone better. Odenkirk, so vibrant in Better Call Saul and the action thriller Nobody, is such an underwritten sad sack here that we can’t help but agree.

Meanwhile, Paul is oblivious about Rita’s unhappiness, saying he enjoys “this forced domesticity” while making biting comments about her vegetarian cooking and self-absorbed musings about his newest project. Fellner plays Rita as not wanting to rock the boat, escaping through jogging before a confrontation becomes inevitable.

Aside from the romantic tensions, Jonathan frets about finances while Clarissa deals with a handsome male tenant who pays attention to details such as her birthday. Guess whom she soon finds more appealing?

Miniucchi frames some interactions in a telling fashion, such as not showing Sue in full or revealing her face in medium shots with Jonathan while he’s emotionally distant from her. She also has a knack for little moments that grate on a person’s nerves, whether it’s Sue’s nature noise at bedtime keeping Jonathan awake or Rita not hearing Paul’s questions from the next room, leaving him to answer himself.

These little moments are relatable, but they don’t create enough dramatic momentum. What’s more, there’s not much chemistry except for Mitchell and Huston, who through late-night video chats and familiar, gentle tones portray longtime friends who want the best for each other.

Without outside forces or a sense of urgency impacting these characters as in other pandemic-set films, such as I’m Fine (Thanks for Asking), Life Upside Down mutes its emotional impact. It gives us lives interrupted instead of genuine upheaval.