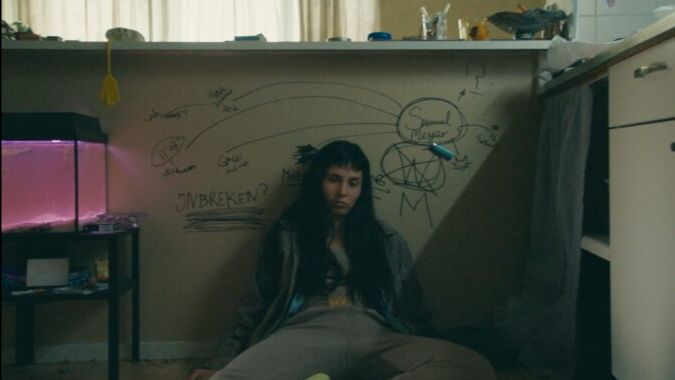 Jim Jarmusch meets Sarah Jacobson in the neo-slacker banger The Girl Who Was Cursed, and somehow, it’s even better than it sounds. The brainchild of writer/director Zara Dwinger, the film follows the eponymous Gizem (Sinem Kavus), a Turkish-Dutch stoner who has let pretty much her whole damned life go to seed after quitting music school and losing interest in everything except for getting high and spying on her neighbours from her apartment through her trusty binoculars. Disconnected from family and having no real friends, her fascination with one particular neighbor, Samuel (Victor Ijdens), takes a sudden turn when he helps her home one morning after she has passed out on the street. Before the friendship can develop, however, Samuel suddenly vanishes, mobilizing Gizem who dedicates herself to finding out what happened to him.

Beautifully shot by Douwe Hennick and with a charming score by Altin Gün, the Amsterdam-based Dwinger does a lot with a little in this lo-fi slow burn of a gem that clocks in at a mere 46 minutes in length. Now playing at Slamdance where it is making its North American premiere, there’s a lush intimate texture to The Girl Who Was Cursed, bringing to life its array of oddball characters – a local mattress oligarch, a whacked-out marijuana dispensary sales girl, Gizem’s poor long-suffering mother and her endlessly patient taxi driving brother – that add depth and color to the film without it ever feeling quirky for quirky’s sake.

At the heart of it all lies the captivating Gizem herself, played to perfection by Kavus without whom it is hard to imagine this film having even half the punch it has. Everything about her is lost and she’s clearly given up hope long ago, self-medicating through her isolation one lonely day in her dingy apartment to the next. But this is no melodrama, and Gizem’s sudden interest in Samuel’s fate – as absurd as it largely is – makes sense to both her and us, and as meandering as her journey is, we can’t help but go with her. The Girl Who Was Cursed is an elegant, eloquent micro-noir with a dark comic flavor, the perfect US calling card for both Dwinger and Kavus who are very much names to watch.