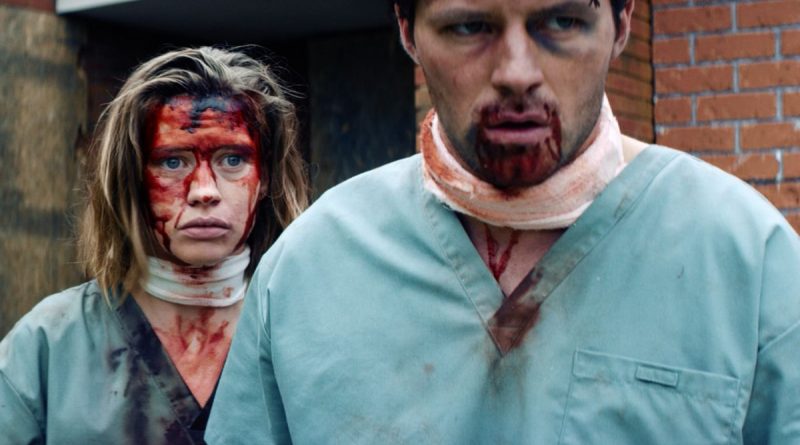 Alive opens with a narrative that fragments almost immediately into multiple strands. First, a doctor informs a woman that her chances of conceiving a child are slim but that maybe in these particular times that’s a good thing. A TV reporter updates us on how a new disease is spreading and then a teacher is forced by officials to share information with her students about containment centers where people need to turn themselves in if they are infected. We next meet up with a riot cop who is bitten by an infected, and finally we land at an isolated house that a man is fortifying against whatever might be out there be it infected people, marauders, or government forces.

The strands mostly connect as we are given a world thrown into chaos by a virus that turns people into zombie-like creatures that crave flesh and blood. As we discovered when COVID hit, infrastructures can fall, people can behave in shockingly bad ways, and governments can fail to react appropriately. And the film taps into all of those thing but without a clever sense of playing off of things we learned during our real pandemic.

The film marks the feature debut of writer-director David Marantz and producer-editor Annie Rachel Hillman. They are working with an obviously limited budget. Much if not all of the sound seems looped or replaced with foley work, and the effects are erratic.

The problem with Alive is that it does not recognize what its strengths are in order to play them up or understand its limitations so it can work within them. So the filmmakers should not try to show a smoking building if it’s not going to look good nor should they show riot cops facing a supposedly dangerous mob of zombies when you only have a handful of each and the edges of the frame look empty. Let films with bigger budgets show that.

A perfect example of a zombie film understanding how to work within its limitations is Ponypool, which takes place inside a radio station during a storm while people call in to report on strange things happening. The film doesn’t show a lot but it creates a sense of horror and dread by making us imagine what is out there. The writing and the acting convince us something horrific is happening without having to spend a lot of money on CGI and make up effects.

The lesson other filmmakers should learn is that if you can’t do big scenes that cost a lot of money then focus on what you can do effectively with character and story. For example, there is a well crafted scene in Alive at the isolated house where the man, Dan (Neil Sheffield), is shot against a pitch black attic where he is hiding a secret. It is well shot, creates a sense of mystery and apprehension, and sells us on the fact that this man is dealing with something painful and difficult. It engages us far better than action scenes that are out of reach for this film and its budget.

The film suggests some interesting ideas about how society might be forced to move forward in a world where we have to cohabit with the infected. Some of that terrain, especially when dealing with a group led by a religious man, feel overly familiar and hackneyed. But giving us zombies that still have some sort of awareness of who they are and what they were is an interesting angle to explore.

Making a zombie film always invites comparison because there are so many entries in the genre and therefore so many films to compete with. And sorry to report that Alive doesn’t have anything to make it stand out amongst the reanimated corpses.