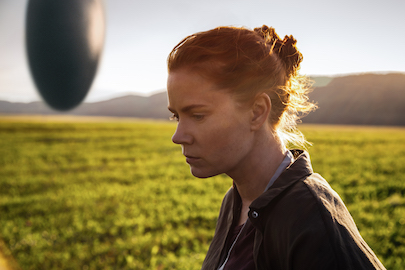 English has always been the de facto language of science fiction. Even when James T. Kirk and the crew of the USS Enterprise embarked on their original five-year mission, every new alien species they encountered helpfully spoke English. When language fails, and aliens arrive, making odd noises and gestures, we had Independence Day’s Will Smith punching them in the face and saying, “Welcome to Earth.”  Read on…

Director Denis Villeneuve’s new film Arrival, strikes a balance somewhere between these two points. When twelve enormous spacecraft appear, each resting gently over a different section of the planet, the humans scramble to figure out what the new visitors want. Amy Adams and Jeremy Renner play a linguist and a scientist charged with the formidable task of learning to communicate with aliens.

Villeneuve brings a dedicated attention to the film’s somber mood and tone, aided immeasurably by a score from composer Jóhann Jóhannsson. But at the heart of the story is the idea that language constructs reality. The good old Sapir-Whorf hypothesis that states: “…the structure of a language affects its speakers’ cognition or world view,” or in this case, otherworldly view. This concept has been the basis for a number of films and novels from Suzettte Haden Elgin’s feminist sci fi epic Native Tongue to Close Encounters of the Third Kind. Language, and by extension all communication, is a fraught business. So, it is here as well, as the global sabre-rattling and the threat of violence escalate, understanding arrives, one word at a time.

Pam Grady: Amy Adams is the linguist who works out all the answers in an alien invasion in the moving philosophical sci-fi drama Arrival, a film that also flips the script on typical female/male roles by placing the woman front and center while the male characters strive (and fail) to keep up.

Leba Hertz: My pick is Arrival. I’m always a sucker for sci-fi movies dealing with aliens coming to earth.