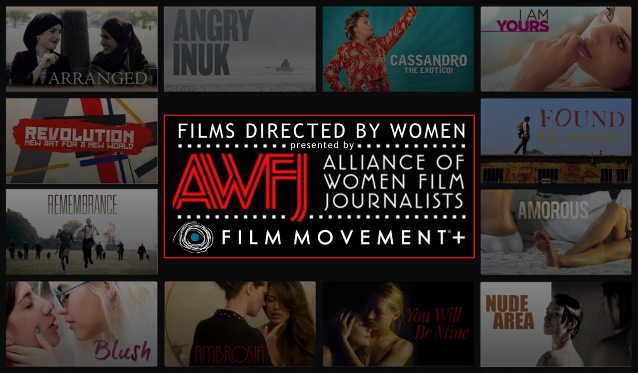 NY-based distributor Film Movement and their signature streaming service, Film Movement Plus have announced a partnership with the Alliance of Women Film Journalists to highlight women-directed films from the platform’s deep catalog. The partnership launcehs on May 20, 2022 with a re-branded carousel “Films Directed by Women Presented by the Alliance of Women Film Journalists” and weekly feature-length reviews provided by AWFJ’s roster of award-winning critics.

Each week throughout the summer, one of AWFJ’s leading film critics will select a woman-directed title for review. The featured title will be highlighted on Film Movement Plus, which features more than 150 women-directed features and shorts on the AWFJ Presents carousel, as well as on AWFJ.org and in AWFJ’s newsletters and social media channels.

The first month of the partnership will feature reviews of such award-winners as Rungano Nyoni’s provocative first feature I Am Not a Witch, Beadi Finzi’s Brazilian dance documentary Only When I Dance, Julie Taymor’s magical A Midsummer Night’s Dream and Amour Fou from talented auteur Jessica Hausner. In addition, AWFJ will have the opportunity to offer their readers an exclusive discount on the subscription service, which gives access to hundreds of outstanding films.

“Film Movement has a long history with women filmmakers – from Melanie Laurent and Marleen Gorris to Jessica Hausner and Cathy Yan — and I can think of no better organization to partner with in support of our ever-growing catalog of talented directors than the Alliance of Women Film Journalists,” says Film Movement Michael Rosenberg. “We’ve long admired their mission and trenchant criticism, and look forward to a fruitful partnership to create greater awareness and exposure for some of the most talented contemporary women filmmakers.”

AWFJ’s partnership with Film Movement fits perfectly with the organization’s mission to garner greater viewership and appreciation for films made by women and about women. Film Movement’s outstanding catalog of female-helmed films on the “Films Directed by Women Presented by the Alliance of Women Film Journalists” carousel provides many examples of female=helmed films, including titles that pre-date the #MeToo Movement and illustrate how women artists have created brilliant cinema despite male domination of the film industry. Audiences will love these films as much AWFJ’s critics do.

FILM MOVEMENT PLUS (www.filmmovementplus.com) opens up a world of provocative, compelling and award-winning films. Priced at $5.99 per month with a free 14-day trial, the SVOD subscription service, currently available on Roku, Apple TV, Amazon Fire, Android TV, mobile (iOS and Android), and Chromecast, offers consumers immediate access to over 500 festival favorite feature films and 100 short films, including a growing catalog of acclaimed films not available anywhere else. New films are added weekly from major festivals around the world. Classics from the Film Movement catalog include Marleen Gorris’ landmark Oscar-winning film Antonia’s Line, Sergio Corbucci’s iconic 1968 Spaghetti Western The Great Silence, and much more.

Founded in 2006, the Alliance of Women Film Journalists, Inc. (AWFJ), a not-for-profit corporation, is an international association of highly qualified professional female movie critics, reporters and feature writers working in print, broadcast and online media. We are dedicated to amplifying the voices of women film critics and to supporting work by and about women – both in front of and behind the cameras – through our lively, well-trafficked Website at www.AWFJ.org, featuring our Movie of the Week, weekly openings list, monthly Spotlight profile and a wide range of member-written reviews, interviews and essays about current and classic cinema. AWFJ’s coveted EDA Awards, presented annually in December and at various film festivals throughout the year, recognize the outstanding cinematic accomplishments by and about women.