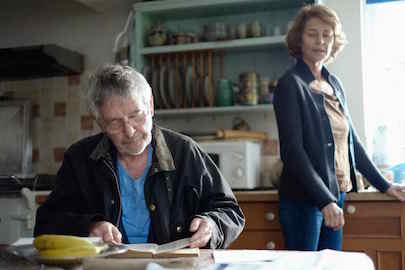 Like that film, this is also a drama about love and relationships told in an intensely personal way. Its protagonists are long-married couple Geoff (Tom Courtenay) and Kate (Charlotte Rampling) who find their relationship rocked by a revelation from the past on the eve of their 45th anniversary.

The strength and joy of 45 Years rests almost entirely on its two central performances. Rampling and Courtenay both turn in exceptional, nuanced and emotional performances, and it’s wonderful to see them sharing the screen. It’s also wonderful to see a narrative revolving around an older couple which has nothing to do with their age; the issues being discussed here are love, trust and loyalty, rather than anything to do with advancing years. That the central characters are older, however, gives it a sense of power and intensity that make it an extremely emotional watch.

For his part, Haigh has expertly adapted the short story by David Constantine into an insightful and poignant screen narrative, and his measured, empathetic direction allows his characters to shine. An absolute must watch, and undoubtedly the best British film of the year.

Pam Grady: Tom Courtenay and Charlotte Rampling won the acting prize at the Berlin International Film Festival for their delicate work in 45 Years, the first of what should be many awards. As a couple facing a sudden fissure in their marriage in Andrew Haigh’s riveting domestic drama, they are simply dazzling.

Jennifer Merin: Intensely and quietly emotional performances from costars Charlotte Rampling and Tom Courtenay provide an intimate glimpse at a love relationship that encounters a new challenge and comes to a near crisis after 45 Years of marriage. A must see for the magnificently masterful performances of two incomparably iconic actors. Lots of well-deserved Oscars buzz for both, and for writer/director Andrew Haigh.

Anne Brodie: 45 Years is one of my favourite films of the year but I fear it will be overlooked in awards season by strong films like The Revenant, Joy and Hateful Eight.

Other Movies Opening the Week of December 21 – December 28