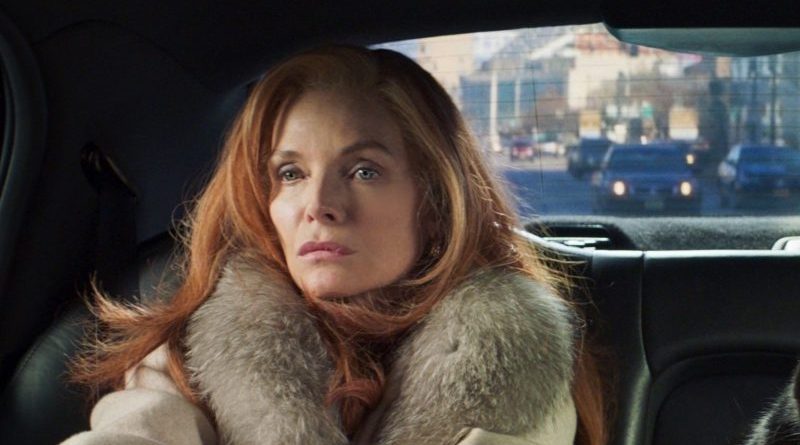 Michelle Pfeiffer seems to have nine lives in French Exit. She is also a poster child for the wealthy WASP mavens of the last century who never ate, rarely emoted, smoked and drank heavily and were perfectly turned out at every waking moment. Women named Babe, Alva, Muffy and Cornelia.

In her role as a down-on-her-luck society widow heading to Paris with her son Malcolm (Lucas Hedges), the film French Exit— adapted by Patrick deWitt from his own novel and directed by Azazel Jacobs — is a study of Pfeiffer’s character Frances’ fall from 1% grace, her processing of this fact and her general blasé approach to it.

Pfeiffer’s Frances Price has “goodly thoughts” of offing herself and her son once she realizes the absolute rock bottom of her destitution. She is an oddball widow who, without explanation, left her discovered, suddenly dead husband to rot on their bed. There are repercussions for that action, we learn later in the film. Yet years later when the boom is lowered on her finances, Frances travels to Paris with her son thanks to a kind offer from a sympathetic society friend.

And absolutely no one beats Michelle Pfieffer in this sort of role. She excels in playing the tortured patrician soul and is often cast as the wife of a very bad man.
In the 1988 film, Married to the Mob, she extricated herself from Alec Baldwin’s cad philandering mobster husband. In the 1983 film, Scarface, she went from one ethically challenged old man to a stone cold Cuban refugee criminal. In the 1992 film, Batman Returns, she went from mousey nobody to a sexy killer cat. In 1994’s film Wolf, she became the fierce lycanthrope after hot pursuit from the lead, Jack Nicholson. In short, Pfieffer is exemplary at maneuvering around challenging men on screen, kind of like a cat.

Our widow, Frances Price, her son and her small four-legged shadow, Small Frank, an ebony feline whose existence is a touchstone for her late husband Franklin (voiced by Tracy Letts) quickly must sell the remaining valuables and pack up for her new adventure.

And one imagines that the fun in being entitled and rich is you think you can get away with things that average people cannot. It also gives you ample time to think—as our Frances does—that your life “is full of cliches.”

Frances and Malcolm leave New York after a midnight sale of their possessions to to fund their escape to Paris. They board a ship headed to France, where fortuitously a concerned friend has lent them a stunning apartment in Paris.

Their new environs are quite lovely for the two, broke-ass sorts. Frances and Malcolm spend their money willy nilly. But again, they move languidly and think like people who have never sweated a bill in their lives. Indifference is Frances’ most defining trait at this point.

“What a lottery life is,” she writes in a very French cafe scene, a rather salacious observation of French men’s love affair with exposing themselves inside a pointed goodbye note explaining that she will kill herself once their money runs out.

A twist occurs when Small Frank decides to do what cats do, make a break for it. Julius (Isaach De Bankolé) is hired as a private investigator to find him through a “witch” met on the ship who Malcolm “carnally” encountered, as champagne flows and Mme.Reynard dines on all of this chatter and appears to be in the Price fold, commiserating with them as they plan what to do over Small Frank’s indiscreet disappearance. We learn this missing cat may house the spirit of her dead husband Frank. The more we see and hear Mahaffey as Mme. Reynard, she solidly takes the spotlight and is a welcomed bonus supporting performance in this film.

The mood changes as Malcolm’s ship lover-slash-witch Madeleine (Danielle Macdonald), a clairvoyant, is found by the hired detective. Frances’ dead husband’s passing is recounted as the cat’s importance is now crystal clear. As with any good reinvention yarn and second act for well-heeled women of a certain age, a riotous seance is conducted. This quickly turns into a contentious couples counseling with a dead man and we “meet” Frank who outs Frances’ intentions toward him.

Another character brought in is Malcolm’s dithering estranged fiance (Imogen Poots as Susan) who is disliked by his mother. Susan has a change of heart and follows Malcolm to Paris in a theatrically dramatic dinner party scene. In the scheme of this movie, her character’s import remains unclear.

French Exit exposes Malcolm’s buried feelings about his childhood and existential doubts and parental abandonment, and of course, Frances’ ennui and desire to stop breathing. “You were a last ditch effort, in effect..and then when he saw you he turned away from you and me both…” explains Frances to Malcolm about his “emotional moron” father Frank, who now is distraught to be reincarnated as a worm filled, flea-ridden cat.

French Exit is a huge reveal of the devil that inhabits the idle lives of those who are never put to the test to survive in this world by working for anything. Fortunately the realization of what’s truly important in this short life finally comes to Frances as Pfieffer’s character dreamily wakes up from her sleep walking through her life.