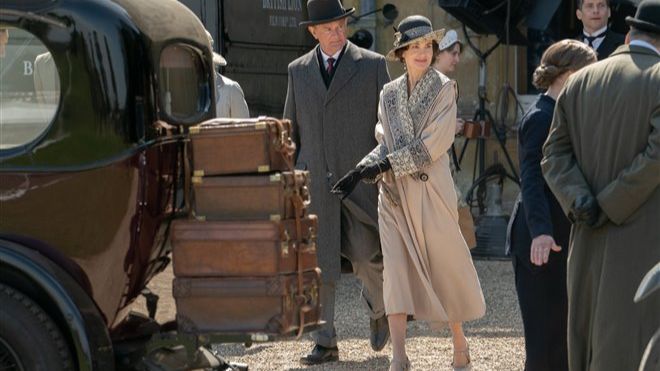 In Downton Abbey: The New Era. the Crawleys of Grantham have invited us back into their stately manor to catch us up on what the Earl, his family, and all of the spunky servants have been up to of late. This is the sequel to the 2019 movie spinoff of the globally popular six-season TV series that lasted from 2010 to 2015, and we are very familiar with the aristocratic family, their cohorts, servants and their circumstances.

When last we left the Abbey, the band of Brits had prepared for a visit from the King and Queen of England. Now, in order to get the mansion’s new roof paid for, they are reluctantly hosting Hollywood actors (dreadful) as a movie crew takes up residence at Downton Abby to film a silent motion picture titled The Gambler. Will Lady Mary and the butler Thomas Barrow fall for the influx of Tinseltown glamour?

Meanwhile, the Dowager Countess has found out she has inherited a villa in the South of France, and Robert, Cora and several other members of the household leave Downton Abbey to hightail it down there to find out why she is the beneficiary. Did a young Violet grant the ultimate favor of intimacy to a rich Frenchman as a new bride? Is Robert really a Crawley?

Fans of the Downton Abbey franchise will find The New Era scathingly delicious and sentimentally sweet. Dame Maggie Smith’s tart tongue is still sharp. But, if you have never visited the Granthams before, you’ll probably have more fun watching your favorite DVD in an AirBnB. Downton Abbey: A New Era gets a 7 out of 10.