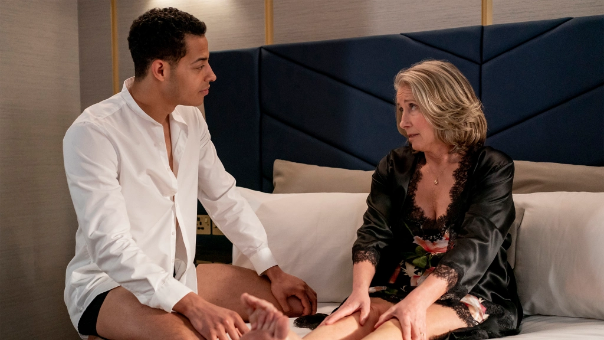 For the dramedy Good Luck to You, Leo Grande, 63 year-old Oscar-winner Emma Thompson bravely agreed to the first fully nude scene of her career.

“I’ve never been offered sex scenes,” she told audiences at the (virtual) Sundance Film Festival, where the film premiered. “I have never conformed to the shape of someone they might want to see naked. By ‘they,’ I mean male executives. I’m too mouthy, not pretty enough.”

In the film, Thompson plays uptight Nancy Stokes, a widowed, retired school teacher who books a hotel room and hires a much younger male escort, Leo Grande (Daryl McCormack), to help her achieve her first orgasm.

At first, their interaction is understandably awkward. But he’s confident and charming, willing to engage in conversation. He’s from a dysfunctional Irish-Catholic family. She’s the mother of a chemist son, whom she finds boring, and an overly needy, grown daughter. Gradually, as their interplay becomes more agile and adventurous, Nancy is able to achieve sexual satisfaction.

At the conclusion, Nancy stands in front of a mirror, appraising her naked body. “I’ve judged myself all my life and continue to do so,” Thompson admits. “Playing Nancy was hugely helpful to me, because Nancy is not an actress – she’s not been judged for her looks – but she’s a woman who’s able to finally stand in front of the mirror without hating herself. That was very instructive and helpful.”

Shooting an average of 12 pages per day for 19 days, Australian director Sophie Hyde wisely filmed Katy Brand’s character-driven script in chronological order. And because they were able to rehearse for a couple of weeks, Thompson and McCormack did not use an ‘intimacy coordinator.’ Instead, they improvised on their own until they felt totally comfortable with one another.