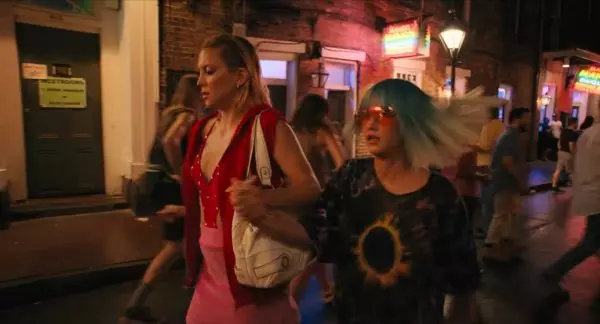 Filmmaker Ana Lily Amirpour delivers a tasty walk on the wild side with her fourth feature, Mona Lisa and the Blood Moon. The film opens in a dark boggy terrain with the sounds of croaking frogs and other creatures as the song made famous by Nat King Cole is heard in the background.

We then come across an image of a young Korean woman, Mona Lisa Lee (Jeon Jong-seo), who has been locked up in a facility since she was a child. However, she possesses the ability of psychokinesis, the ability to move objects by mental effort alone. When a sadistic worker tries to hand-cuff her, she then causes the woman to stab herself. Mona Lisa then strips away her strait jacket and runs away.

She ends up in New Orleans alone, but soon meets up with tough-as-nails stripper Bonnie Belle (Kate Hudson) who cashes in on Mona Lisa’s ability to control men’s minds, ultimately causing them to drain all their cash savings from ATM machines and hand it over to them. However, a cop (Craig Robinson) knows about their dirty deeds. He stalks the women while Mona Lisa causes him to shoot himself in his knee while they get away and eventually hide out at Bonnie’s home.

Amirpour provides humorous details along the way, as Mona Lisa acquires a hankering for Cheeto-like snacks. She also hooks up with a guy called Fuzz (Ed Skrein), who appreciates her and even cuts her hair. Mona Lisa also finds an ally in Bonnie’s 11-year-old son Charlie (Evan Whitten) as they have similar taste in music. Alas, the plot has some flimsy moments. But by the end, our heroine doesn’t just strive. She survives.