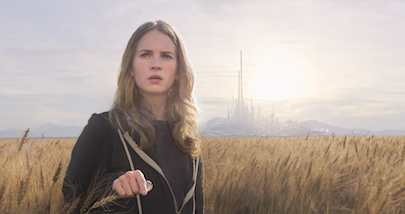 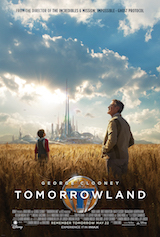 Opening May 22, the AWFJ Movie of the Week is Tomorrowland, the new summer family blockbuster from Disney and director Brad Bird (The Iron Giant, Mission: Impossible – Ghost Protocol), who co-writes with Damon Lindelof (Prometheus, World War Z) and newcomer Jeff Jensen. Inspired by the ever-popular Tomorrowland segment of Disney’s theme parks, the story follows teen science geek Casey (Britt Robertson, TV’s Under the Dome) as she discovers the existence of a secret, futuristic world hidden in the midst of time and space that may hold the fate of humankind. Teaming up with mysterious Tomorrowland inhabitant Athena (Raffey Cassidy, TV’s Mr Selfridge)  and former boy genius turned miserable grown up Frank (George Clooney), Casey must draw on all her knowledge, ambition and positivity if she is to realize her full potential and make a real change.

Driven predominantly by two young female protagonists – while Clooney may have top billing, he is most certainly the supporting act – Tomorrowland marks something of a sea change when it comes to its gender dynamics. To see girls being given the freedom to not only be the hero, but also have a detailed knowledge of and passion for science and engineering, know how to throw a punch and use their intelligence and ingenuity to save the world is a truly wonderful thing. Casey and Athena are truly characters to inspire, and young stars Robertson and Cassidy play them with a charm and wit that should see the film appeal to all ages. That it’s also hugely entertaining, and visually stunning, is just the icing on the cake.

Nell Minow: Tomorrowland looks like the family movie of the summer, wildly imaginative and lots of heart.

MaryAnn Johanson: My pick is Tomorrowland. A girl gets to have an adventure! Read review.

Leba Hertz: I’ll go with Tomorrowland– reminds me of the 1964-65 World’s Fair in New York