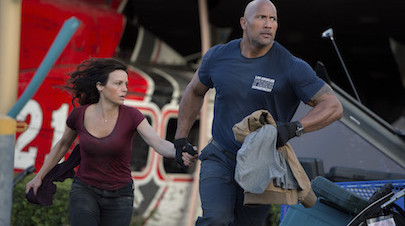 Opening May 29, the AWFJ Movie of the Week is San Andreas, is this year’s requisite big-budget visual effects extravaganza from director Brad Peyton (Journey 2: The Mysterious Island). Starring Dwayne Johnson as a helicopter pilot struggling to reach his daughter after a massive earthquake rips through California, the real star of the show will surely be those edge-of-the-seat FX effects which showcase large-scale devastation in all its eye-popping glory. Read on…

The casting, however, indicates there’s a narrative of some substance, as fighting for their lives alongside Johnson are the substantial talents of Carla Gugino (TV’s Wayward Pines), Ioan Gruffudd (Fantastic Four), Paul Giamatti (Saving Mr Banks) and Archie Panjabi (The Good Wife).  Whatever the story, however, if the trailers promise anything it’s that San Andreas will be one of the most bombastic water-cooler movies of the summer.

MaryAnn Johanson: My pick is San Andreas. Will it be another big, dumb Hollywood action flick, or will it have more to it? (I’m not gonna hold my breath for the latter.) Read review.