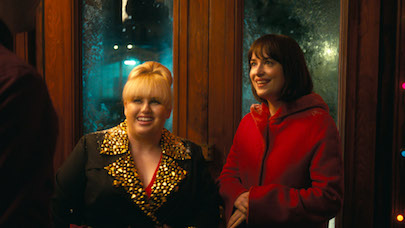 Opening Feb. 12, AWFJ’s Movie of the Week is How To Be Single, the new female-centric comedy from director Christian Ditter (Love, Rosie) featuring a stellar ensemble cast of some of today’s greatest young actresses. Read on…

Dakota Johnson (Fifty Shades of Grey) stars as Alice, a young woman determined to make the most out of being a single woman in New York City. Surrounding her are a colourful group of fellow singles, including Robin (Rebel Wilson), Lucy (Alison Brie) and Meg (Leslie Mann), who are all trying to navigate a world that is defined by shifting notions of love and relationships.

Written by Abby Kohn and Mark Silverstein (Valentine’s Day, He’s Just Not That Into You) along with Dana Fox (The Wedding Date, Couples Retreat), the film promises to be a fresh and modern take on the well-worn rom-com genre in the vein of Bridesmaids.

Sheila Roberts: My recommendation is How to be Single, a fresh take on the comedy genre directed by Christian Ditter that features a talented ensemble cast of today’s best comedic actresses. Dakota Johnson delivers a sparkling performance as a young woman who sets out to have fun and make the most of the single lifestyle in New York City.