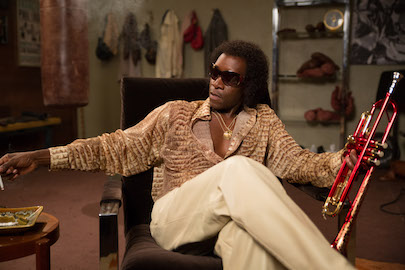 Opening April 1, AWFJ’s Movie of the Week is Miles Ahead, an exploration of the life and music of legendary jazz musician Miles Davis, directed by and starring Don Cheadle. Cheadle takes the director’s chair for the first time, as well as the lead role of Miles Dewey Davis III who, as a jazz musician, expert trumpet player, band leader and composer, reshaped the landscape of American music and continues to be one of its greatest influencers. Cheadle also co-wrote the screenplay with Steven Baigelman, who previously penned James Brown biopic Get On Up (2014). Read on…

Rather than being a sweeping look at his rise to fame, the film is set almost exclusively within the few days Davis spent with Rolling Stones journalist Dave Brill (Ewan McGregor), years after his time in the spotlight, the pair reminiscing about Davis’ career and his lost love Frances Taylor (Emayatzy Corinealdi). Davis is also working on a master recording but, when it’s stolen by a shady agent (Michael Stuhlbarg), the pair must get it back.

It’s an interesting way tell a fascinating story, and Cheadle handles both a difficult role and directorial duties with style.

Anne Brodie: Don Cheadle can do it all. He is a Renaissance man and I know Miles Ahead will be great.

Leba Hertz: Don Cheadle gives an Oscar-worthy performance in a biopic about the great jazz legend.

Jennifer Merin: Don Cheadle is MILES AHEAD in this compelling biopic about the great Miles Davis!