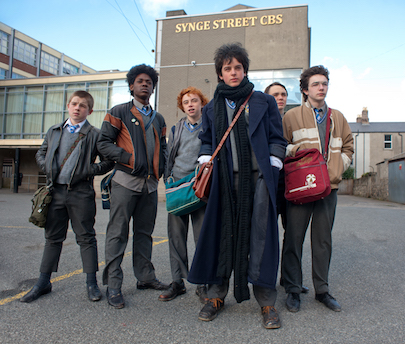 Set in 1980s Dublin, it stars impressive newcomer Ferdi Walsh-Peelo as young teen Cosmo who, looking for a way out of his difficult family life and impress the girl of his dreams, starts a New Wave band with his mates; a venture which eventually sees him start a new life in London. Read on…

Carney is clearly enamoured with the music of the era, and his passion is infectious. A rousing soundtrack and enthusiastic performances from its young cast make this a rip-roaring, crowd-pleasing celebration of the strength of the teen spirit, and the power of music to forge connections and change lives.

Anne Brodie: Sing Street is an uplifting musical comedy about an Irish boy seeking rock and roll stardom 30 years ago. Young actor Ferdia Walsh-Peelo is phenomenal. Not to be missed.

Pam Grady: Once filmmaker John Carney returns with Sing Street his brightest, most crowd-pleasing musical yet, an autobiographical story of a young 1980s teen (a delightful Ferdia Walsh-Peelo in an indelible screen debut) who forms a New Wave band with his mates in a bid to forget about his troubles and win a girl’s heart.

Nell Minow: Sing Street — from the Once writer/director, is filled with the liberating jubilation of making music.

Jennifer Merin: – A Irish lad’s charming coming of age story that’s all wrapped in music and a girl. Simply delightful!