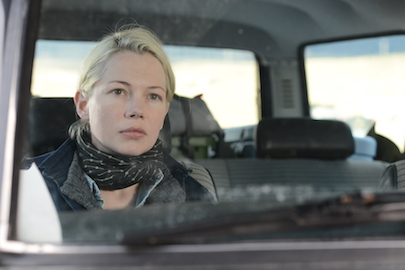 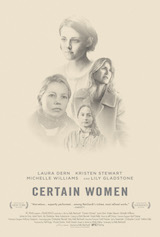 Kelly Reichardt’s body of work, River of Grass (1994), Old Joy (2006), Wendy and Lucy (2008), Meek’s Cutoff (2010); and Night Moves (2013) has established her as a major American cineaste. Her latest film, Certain Women, maintains her masterful, yet quiet trajectory. The film, based on a series of short stories from Maile Meloy, features a remarkable quartet of women including Laura Dern, Kristen Stewart, Michelle Williams and newcomer Lily Gladstone. Set against the small town vistas of the American Northwest, captured in bone-dry beauty by Reichardt’s longtime cinematographer Christopher Blauvelt, Certain Women shares with her earlier films the same attention to truth, mediated by plainspoken compassion and humility. Read on…

At a recent mid-career retrospective of her work, offered at The Cinematheque in Vancouver, Reichardt spoke about her films. Her stories were filled with humour and a certain flinty resolution to keep going, making work, in her own deeply individual and idiosyncratic fashion. When River of Grass debuted at the Sundance Film Festival, it was heralded as the emergence of a new American voice, despite the fact that Kevin Smith (then king of lo-fi) said that it looked like it was made with postage stamps. Leaving aside Mr. Smith’s snide remark, the film was a minor hit. But for the next twelve years, Reichardt struggled to get another feature film made, couching surfing in friend’s apartments, taking teaching gigs, and making a few short films. It wasn’t until Old Joy in 2006 that she broke through again, with many folks remarking on the power of this supposed ‘debut’ feature’.

Reichardt deserves props for making films that are so singular in their narrative methodologies as well their cinematic construction. Call it an almost ornery determination to go against the flow, and make films that demand patience, stillness and thought. In an era where filmmakers edit like they were in cocaine-induced frenzy and move the camera at the slightest excuse, this dedication to purposeful slow storytelling feels practically revolutionary. A new work from this formidable woman is truly a cause for celebration.

Thelma Adams: Kelly Reichardt’s Certain Women. Fantastic actresses on display. I don’t feel passionately for her films but I respect her body of work and her concerns for small moments of grace as lived in near real time.