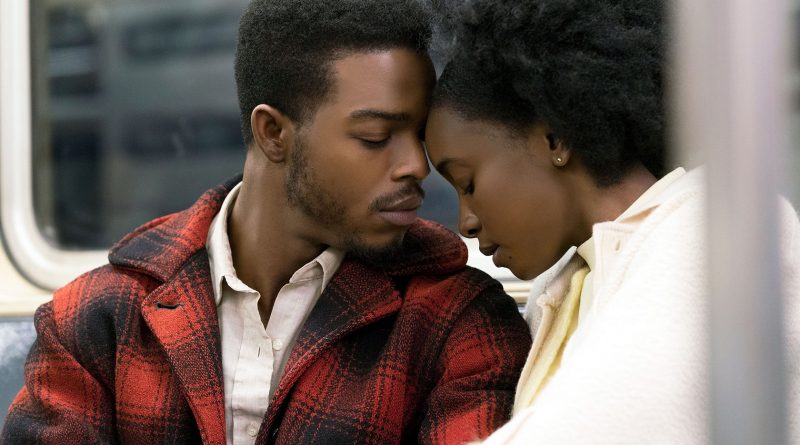 Although the story is set in New York City, the title references the Memphis, Tennessee, street said to be the birthplace of the blues, and the film opens with the Baldwin quote that “Every black person born in America was born on Beale Street, born in the black neighborhood of some American city, whether in Jackson, Mississippi, or in Harlem, New York. Beale Street is our legacy.”

In 1970s Harlem, childhood friends Tish Rivers (newcomer Kiki Layne), 19, and Fonny Hunt (Stephan James), 22, inexorably, beautifully fall in love and look hopefully forward to building their life together. Their love story unfolds in nonlinear fashion, so by the time Tish realizes she is pregnant, her aspiring artist lover is already in prison, falsely accused of raping a Puerto Rican woman (Emily Rios).

Tish knows that Fonny is innocent, so she vows to have him out of jail before their baby is born. Her steadfast mother Sharon (Regina King in an award-worthy turn), loyal father Joseph (Colman Dingo) and outspoken sister Ernestine (Teyonah Parris) vow to support the couple come what may. Fonny’s holy-roller mother (Aunjanue Ellis) and disparaging sisters (Ebony Obsidian and Dominique Thorne) insult and reject Tish, but Fonny’s hard-drinking father (Michael Beach) is willing to team with Tish’s dad and go to great lengths to defend his son.

Although the case seems straightforward – Fonny has an alibi since he was having dinner with Tish and his pal Daniel (Brian Tyree Henry) at the time of the crime – the family soon learns that justice will be hard for the young black man to come by: Daniel is recently out of prison after serving two years for stealing a car even though he doesn’t know how to drive, so neither he nor Tish will be considered reliable witnesses. The victim has fled back to Puerto Rico, after being pressured to implicate Fonny by a racist cop (Ed Skrein).

Between Baldwin’s powerful prose and Nicholas Britell’s elegiac score, Jenkins never lets the viewer forget that this tale is all-too timely and familiar, given the still disproportionately high incarceration rates among black men. But love, family and community are the what steer this achingly exquisite and tentatively optimistic Beale Street story.