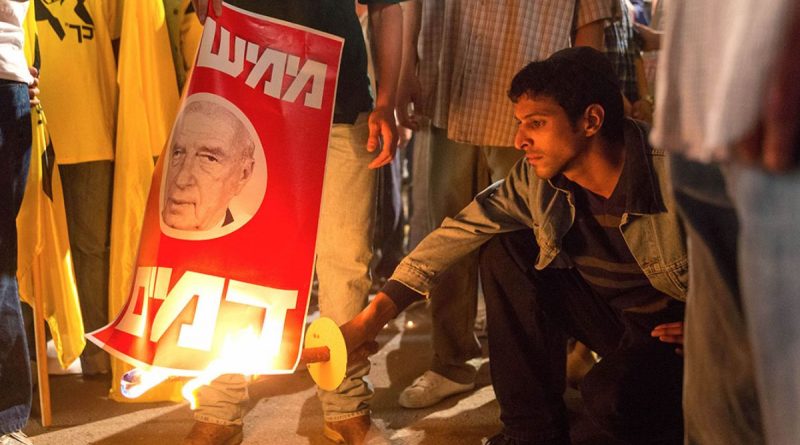 Incitement tracks the aftermath of the Oslo accords for P.M. Yitzhak Rabin

The anchor of Incitement, this two-hour, historically grounded narrative, is Yigal Amir, outraged at the loss of territory, withdrawal of Israeli police, and freeing of Palestinian prisoners as part of the peace prospects. Quite simply, Yigal seeks justification for revenge, quoting a rabbi who says, “One should sooner by killed than give up land in Israel.” Yigal joins protests, secures illegal weapons, and works to form a militia unit. Through scholarly research and seeking out like-minded individuals, Yigal convinces himself that Rabin is a traitor and subject to the “law of the pursued,” that is, “saving the pursued by killing the pursuer.”

All of this unfolds against a backdrop of periodically intermixed news footage, protests, and speeches, culminating in the Interim Agreement on the West Bank and Gaza Strip, more commonly called the Oslo II Accord declared in September 1995. Based on four years of research, dozens of interviews and viewing hundreds of hours of archival footage, director/co-writer Zilberman says he set out to tell this story as “a warning . . . as well as an appeal” to prevent “the path of violence and the destruction of democracy.” [quoted in press notes]

He and co-writers Yair Hizmi and Ron Leshem present an informative depiction of the many factions and debates then and continuing until today. Yigal’s own family espouses different attitudes, his mother and father on opposite sides of the political issues. So too are Yigal’s fellow law school students, girlfriends and ex-girlfriend, rabbis and Torah scholars. Even knowing the tragic events that this leads to, the impact of Incitement is considerable, Zilberman’s hoped-for warning taken to heart, I can only hope, by all. In Hebrew with English subtitles.

Endnote: When I presented Incitement at the St. Louis Cinema Club, we had the distinct privilege of welcoming Bob Cohn, Editor Emeritus of the St. Louis Jewish Light and past president of the International Jewish Media Association. He recommended a superb book, and I’d like to add this information: Be Strong and of Good Courage: How Israel’s Most Important Leaders Shaped Its Destiny by Dennis Ross and David Makovsky, New York: Public Affairs, Hachette Book Group, 2019. I have found it a wealth of information and incredibly well researched.