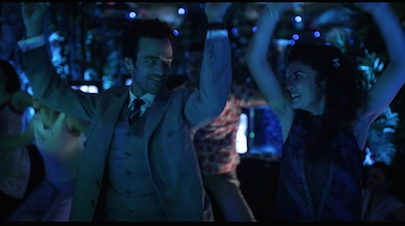 Opening July 11, the AWFJ Movie of the Week is Mood Indigo, another unusual romance from director Michel Gondry, who is known for unique interpretations of love stories that incorporate fantastical, surreal elements. This time Gondry creates a stylishly quirky fantasy world that includes a piano that makes cocktails, a dining room on rollerskates and a cloud-shaped vehicle. French novelist Boris Vian’s cult novel provides the inspiration for the film, which stars Audrey Tautou and Romain Duris who embark on a whirlwind romance that is threatened when an unusual illness plagues Tautou’s character; a flower begins to grow in her lungs. It’s the kind of twist that fits perfectly well with Gondry’s inventive imagination. Read on…

Jennifer Merin: Michel Gondry’s Mood Indigo presents a stylishly quirky fantasy world in which a player a piano concocts exotic cocktails, insect-like machines look after household tasks, and an inhaled flower threatens to end the life of a new bride. This odd and exquisitely realized scenario, based on Boris Vian’s cult novel, is Gondry at his best. Read full review.

Loren King: Michel Gondry’s Mood Indigo is a surreal, inventive confection with such eye-popping delights as a dining room table on roller skates and a piano that mixes cocktails.

Nell Minow: Anything from Michel Gondry is sure to be richly imagined.