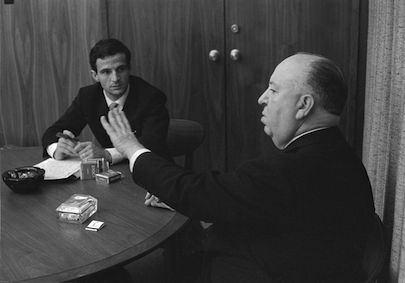 Opening Dec. 2, AWFJ’s Movie of the Week is Hitchcock/Truffaut, filmmaker Kent Jones’ documentary about director Francois Truffaut’s 1966 book Cinema According to Hitchcock, and how it has influenced the work of myriad filmmakers.

The book is a transcript of a series of extensive interviews Truffaut held with master of suspense Alfred Hitchcock 1962, in which they discussed the full body of Hitchcock’s work, film by film, frame by frame. It has become a classic filmmaking text, which captures the art and craft of cinema and has inspired generations of filmmakers and film lovers ever since.

In a series of talking heads, Jones (A Letter to Ella) seeks to understand just what impact the book had on some truly remarkable directors, speaking to everyone from David Fincher (Se7en) and Wes Anderson (The Grand Budapest Hotel) to Martin Scorsese (Taxi Driver), Olivier Assayas (Carlos the Jackal), and James Grey (We Own the Night). The result is an engaging, insightful documentary that is the perfect visual partner to a truly essential book.

Pam Grady: Affectionate, lively, and insightful, Hitchcock/Truffaut delves into one of cinema history’s most sublime moments when the young New Wave upstart Francois Truffaut and Master of Suspense Alfred Hitchcock met for a series of interviews that resulted in the classic book from which the documentary takes its name and a lifelong friendship between two master filmmakers.

Nell Minow: Hitchcock/Truffaut—no book taught me more about movies than that fabulous conversation between two great filmmakers. Can’t wait to see the documentary.

Other Movies Opening the Week of December 1 – December 7