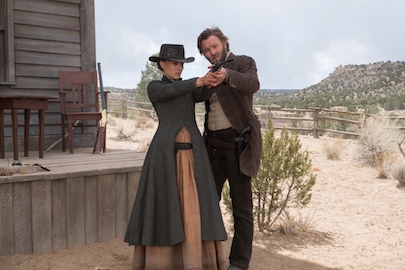 Opening Jan. 29, AWFJ’s Movie of the Week is Jane Got a Gun, the long-gestating Western starring Natalie Portman as a high plains woman seeking to save her husband from the outlaw gang who are after his blood. Read on…

Directed by Gavin O’Connor (Pride and Glory, Warrior) and co-written by Brian Duffield (Insurgent), Anthony Tambakis (Warrior) and actor-turned-filmmaker Joel Edgerton, who also stars, Jane Got a Gun has endured a rocky journey to the screen which has seen many people come-and-go as the project changed hands, stalled and inched its way through production. The one constant, however, has been Portman, on whose stellar performance the film revolves around.

An actress of exceptional range, Portman (Black Swan, Thor, Knight of Cups) is the perfect choice to play the titular role of Jane Hammond, who enslists the help of her drunkard ex-husband Dan (Edgerton) – who she believed had died in the Civil War – to track down the ruthless gang, led by John Bishop (Ewan McGregor), who are after the blood of her current husband Bill (Noah Emmerich).

Beautifully shot in New Mexico by cinematographer Mandy Walker, who provided equally as evocative visuals for the likes of Shattered Glass, Tracks and Truth, Jane Got a Gun is a female-centric Western that deserves to be seen.

Nell Minow: Jane Got a Gun has Natalie Portman in a Black List-script movie that looks very promising.