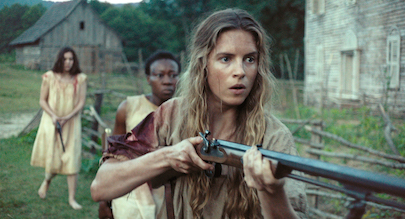 Brit Marling (After Earth, Arbitrage) and Hailee Steinfeld (True Grit, Ender’s Game) play sisters Augusta and Louise who, along with their devoted servant Mad (Muna Otaru, Rendition, Lions for Lambs), are alone in their rural farmhouse in the dying days of the American Civil War. Everday survival is difficult enough, but when a pair of rogue soldiers who have gone AWOL from the advancing Union Army decide to take the house for themselves the women are forced to take extreme action to defend themselves.

The screenplay, from first-time writer Julia Hart, is a dramatic powerhouse of intensity and insight, matched by absolutely stellar performances from Marlin, Steinfeld and Otaru. It turns the inherent masculinity on its head, with three strong, powerful women at its centre to drive the action. British director Daniel Barber (Harry Brown) celebrates this fact, blending genre traditions with a modern style to present a visceral, authentic view of war as told from a little-seen female perspective. It’s bold, brilliant and absolutely unmissable.

Nikki Baughan: The Keeping Room is a rare beast, a Civil War Western told from an authentic female perspective, with three astonishing performances at its heart. It’s undoubtedly one of the best films of the year.

Nell Minow: The Keeping Room has a rare female perspective on a classic genre that has traditionally been the prime locus of masculine archetypes.

Jennifer Merin: Brilliant and explosive, The Keeping Room is a post-Civil Western about women’s struggles for self-determination and survival. Julia Hart has written a flawless script, and the performances by Brit Marling, Haliee Steinfield and Muna Otaru are extraordinary. The Keeping Room is a real keeper. A must see.

Other Movies Opening the Week of September 21-September 27:

September 23
Book: The Upgrade
The Making of Holiday