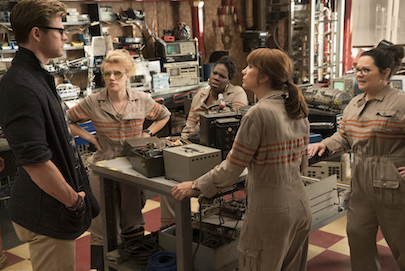 Opening July 15, AWFJ’s Movie of the Week is Ghostbusters, the hotly-awaited new all-female reboot of the beloved sci-fi franchise from director Paul Feig (Bridesmaids, The Heat, Spy). Read on…

When he announced that he was making an all-female Ghostbusters, Feig became the target for controversy and outcry; accusations ranged from gender box-ticking to anger than he was tinkering with such an established, 30-year-old franchise. That all pales into insignificance, however, when compared to the potential importance this movie has for the issue of women in film. If it’s successful – and there’s no reason to suspect it won’t be – it will finally prove beyond all doubt that there is a market for films featuring a predominantly female cast.

And what a magnificent cast it is. Comedy legends Kristen Wiig, Melissa McCarthy, Kate McKinnon and Leslie Jones step into the shoes of the spook-busting foursome (with Thor himself, Chris Hemsworth, taking the role of their hapless secretary in another bit of gender-switch genius). All of these ladies are exceptional performers with a natural gift for comedy, and it is an unparalleled treat to see them given such a high-profile film to shoulder.

Fieg, too, is a director with an inherent flair for delivering films packed with genuine laughs, and is enough of a fan of the original to stay true to its legacy while moving the narrative into the 21st century.

Let’s hope that, with this bold, trail-blazing Ghostbusters, the outdated idea that women can’t take the lead in film is finally laid to rest.

Pam Grady: Melissa McCarthy and Kristen Wiig head the ensemble in this all-female Ghostbusters remake, but while the controversy has centered around whether the women can fill the shoes of the likes of Bill Murray and Dan Aykroyd, the real questions are: What could possibly take the place of the absurd genius of the original film’s Stay-Puff Marshmallow Man and will it be anywhere near as funny?

Nell Minnow: Can a female-led remake of Ghostbusters overcome the meltdown of the fanboys?

Nikki Baugham: I could not be more excited about this all-female Ghostbusters. Not only is it a chance to see four superb women take charge of one of my favouite franchises, but it is a crucially important, ground-breaking step forward in terms of redressing the gender balance in modern film. Bring it on.