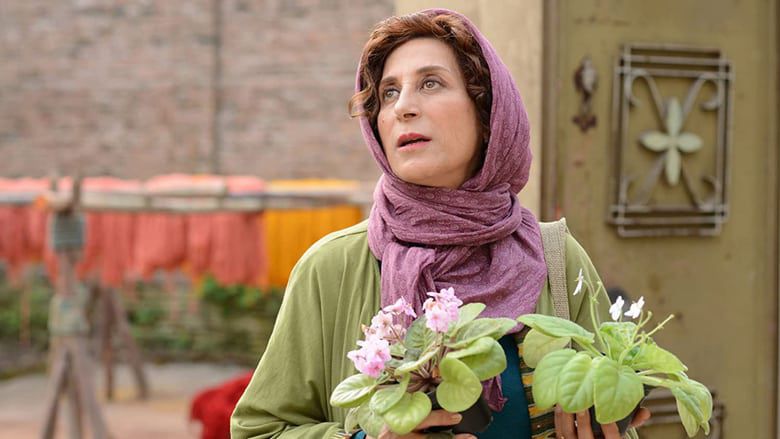 Both poignant and insightful, Mona Zandi Haqiqi’s African Violet is a slice-of-life drama set in a working class neighborhood in Tehran. With strong, naturalistic performances and a vivid sense of place, Haqiqi’s film draws you into its characters’ lives, sharing their triumphs and challenges and creating understanding and building strong feelings of empathy.

The movie centers on Shokoo (Fatemah Motamed-Aria), a resourceful, caring woman who sometimes gets a little over-involved in others’ affairs — but only because she wants to help. Her latest project is bringing her ex-husband, Mr. Fereydoun (Reza Babak), to live with her and her second husband, Reza (Saeed Aghakhani), to keep him out of the nursing home. Reza is skeptical of the plan: At first it seems that’s because of the inconvenience/intrusion, but gradually we learn that there’s more to the story.

As Shokoo works on rebuilding a connection with her former spouse — their divorce was a hard one, and her relationships with their now-adult children suffered — she also negotiates Reza’s feelings, her own sense of duty to both men, and her role in the lives of their friends and neighbors. Haqiqi captures it all in intimate scenes of everyday Iranian life, from shared meals to sheltering from the rain to the fun of making up backstories for passersby. And Shokoo and Reza’s yarn-dyeing business offers lovely bursts of color.

The three main actors are all convincing in their roles, offering lived-in performances and authentic interactions. Motamed-Aria can convey as much with a look as a line as Shokoo, Aghakhani plays Reza with an appealing mix of gruffness and tender kindness, and Babak is both vulnerable and resolute as Mr. Fereydoun, who knows that his choices haven’t all been good ones. As they circle each other in the home they now share, all three come to understand new things about both themselves and each other. — Betsy Bozdech

MaryAnn Johanson At the risk of being too reductive, I’ll say something I don’t think I’ve said out loud before: Iranian cinema might be my favorite national cinema. And African Violet is a perfectly illustrative example of why: it’s beautiful and delicate, so human, and so humane. Cultural differences disappear in a lovely distillation of basic human needs: for connection and communication, for understanding and respect. Mona Zandi Haqiqi shows us how all of life’s ups and downs are present in domestic discord and harmony, and how universal stories can be told from almost entirely within the confines of the home, and from a woman’s perspective. This is a quietly stunning film, and not just because it smashes all the perceived notions about what makes a story appreciable by all.

Pam Grady: Iranian society, the relationships between men and women, and community and familial expectations come into play in Mona Zandi Haqiqi’s big-hearted, slyly political drama. When Shokoo (Fatemah Motamed-Aria) discovers their children have abandoned her ex-husband Fereydoun (Reza Babak) to a nursing home, she brings the critically ill man into her own household. Current husband Reza (Saeed Aghakhani) grouses about her action being an affront to his honor, but it is more complicated than that. These three have a history, and Fereydoun’s presence in the household acts as a catalyst for examinations of those long-standing relationships. Shokoo also has a bad habit of minding other people’s business, a perilous trait in a conservative, deeply misogynistic culture. As much as Reza complains, this is why he loves her: Shokoo is a force of nature who will not be deterred, despite what he, Fereydoun, her children, the neighbors, or even the authorities might say. Aria is simply glorious as a woman who has found a measure of independence, at least within the walls of her own home, by following her ambitions and her conscience wherever they may lead.

Leslie Combemale The nuanced examination of relationships, their construction, destruction, and reconstruction, is at the heart of African Violet. This film is full of subtleties. It is joyful, poignant, and funny, often in quick succession, and it is to the credit of the ensemble of actors working together. Though they all shine, Fatemah Motamed-Aria and Saeed Aghakhani as Shokoo and Reza light up the screen when they play against each other. A master class for performers in the power of listening, director Mona Zandi Haqiqi draws viewers in by holding focus on the leads for what feels like too long, but is exactly long enough for us to feel empathy and share a real connection with them. Beyond being an entertaining experience, African Violet affirms that some challenges of womanhood and motherhood are universal, and offers a fascinating peek into Iranian culture and simple home life.

Kathia Woods African Violet is a demonstration of strength and selflessness. It’s about love and understanding. Shokoo (Fatemeh Motamed), now remarried, decides to bring her ex-husband into her home when she discovers his children placed him into a retirement home. This decision has a disruptive effect on the household. The film doesn’t focus on Iranian culture as much as on the dynamics between a husband and his wife. African Violet is a film that reminds you that your past can affect your present and that not dealing with issues can trouble a marriage just as much as addressing those issues. The film isn’t flashy and most of the interaction takes place in the home. This makes the viewer focus more on the characters individually. Fatemah is trying to help her ex-husband. Reza is trying to save a struggling business and Fereydoun wants control over his life. Each is looking to the others for solutions but desperately holding on to their secrets.

Loren King Mona Zandi Haghighi’s African Violet is a lovely Iranian film rich in universal themes. It’s anchored by the lead performance of Fatemeh Motamed as Shokoo, a deceptively quiet woman whose strength is revealed as she stands up to her current husband Reza (Saeed Aghakhani), ignores gossip in her village, and moves her infirm former spouse Fereydoun (Reza Babak) from a nursing facility and into a room in her house. Shokoo emerges as a maternal figure of heart and humanity perhaps because her grown children are the ones who relegated their father to the nursing home. While the film’s premise could have been played for laughs or melodrama, Haghighi has crafted a gentle, observational drama of ordinary interactions against a shifting household dynamic.

Nell Minow: This quiet, intimate drama is illuminated by the kindness of its three lead characters and its exploration of issues that include masculinity, loyalty, money struggles, aging, and secrets are explored with subtlety and insight.

Susan Wloszczyna: The Iranian domestic drama African Violet, directed and co-written Mona Zandi Haghighi, is an elevated soap opera of sorts that revolves around an unusual three-way relationship. At its center is Shokoo (Fatemeh Motamed-Aria), a strong-featured yet still attractive middle-aged woman who is happily wed for a second time to the virile Reza (Saeed Aghakhani). Read full review.

Sandie Angulo Chen: Director Mona Zandi Haghighi’s relationship drama African Violet is a touching exploration of an Iranian woman’s decision to care for her sick ex-husband in the home she shares with her second husband. The film stars the wonderful Fatemah Motamed-Aria as Shokoo, who is so upset that her estranged children put their father in a nursing home that she’s willing to unbalance her domestic life to do the right thing. The performances are outstanding, and the nuanced story explores how different relationships are transformative. A compelling and quietly powerful film.

Cate Marquis In director/co-writer Mona Zandi Haqiq’s affecting Iranian drama African Violet, a woman named Shokoo (Fatemah Motamed-Aria) takes in her older ex-husband Fereidoon (Reza Babak) after their children place him in a nursing home. She does this because she thinks it it the right thing to do, but her act of kindness disrupts her quiet life with her second husband Reza (Saeed Aghakhani) and revives old issues surrounding the long-ago divorce. Beautifully-acted and heartfelt, AFRICAN VIOLET offers both a moving, thoughtful family drama and an insightful, frank glimpse into Iranian life.